American Roulette as Our True Pastime

Here at Jackpot Capital, we take an immense amount of pride in providing our audience with the finest online casino games the internet has to offer. We want to take this post to focus on one of our most popular games, and our country’s pastimes, American roulette! We have a variety of choices to play with, such as European roulette, the original French roulette, and even two amazing American roulette games! We also offer a Multiplayer roulette, which gives you the opportunity to play along with up to several live players simultaneously! With features like this, who needs to step foot into a casino, when you can experience all the fun they have to offer from the comfort of your own home with Jackpot Capital online casino!

All About American Roulette

The use of a wheel to gamble with while passing time is an ancient event. Ancient Greek soldiers would mark their metal shield and spin them, taking bets on where it would stop. The soldiers of the Roman Empire would use chariot wheels to play a game similar to what we now know of as “Wheel of Fortune.” But, there are two games which are now considered to be the parents of modern roulette. Hoca, an Italian game, which spread across Europe in the 17th century, was set up with 40 numbered cups spread across the perimeter of a table, with 3 of them numbered 0, and bets would be made on where a ball, which was spun, would land. The other game was named E-O, meaning Even/Odd, and it was set up similarly to Hoca, except it was the table that was marked, and there were no numbers, as players would simply bet if the outcome of the spin would be even or odd.

Late in the 17th century, the famous French scientist Blaise Pascal was attempting to create a perpetual motion machine, and inadvertently created the foundation for the roulette wheel. Roulette, meaning “little wheel” in french, was first played in monasteries, as a form of entertainment, but soon migrated to French casinos, where it was thought of as a sophisticated game for the elite.

Originally, French roulette was played on a wheel with numbers ranging from 1 to 36. This was until later in the 19th century, when the French brothers, Francois and Louis Blanc, added a zero to the wheel, which increased the odds of the house and led to more casino owners adding the game to their collection. The Blanc brothers took this game to Germany, until the 1860’s when gambling was banned in the country, and they moved to Monte Carlo, thus transforming it into the gambling center or Europe, and skyrocketing the popularity of roulette in the process.

Around the same time, roulette began to take off in the United States. Originally brought over to the states from French immigrants fleeing the French Revolution, roulette began to take off across the country, after taking over New Orleans. American roulette distinguished itself by containing an extra number, the 00, in addition to the 0, as it was more attractive to enterprising casinos. As the game evolved in the United States, it spread even further, especially during the gold rush, which was one of the largest gambling boom’s in the country’s history! Over the years, American roulette began to become the main way of play, and with the world wide casino boom in the 1970’s, it was adopted as the casino standard. 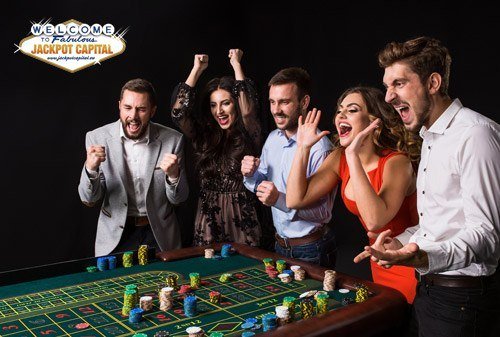 With the rise of the Internet, so to came the rise of online casinos. Online roulette play began in 1995, and since has taken off even further in its popularity, as you can play a wide variety of different styles of roulette! The players are no longer confined to their location and at the whim of a casino boss. There aren’t many better feelings in life than being able to enjoy the excitement of the games you love from the comfort of your own home. The only thing better is the feeling of winning with your feet up!

It’s as easy as pie to get started playing American roulette, or any roulette for that matter, with Jackpot Capital! All you need to do is head on over to our website and play with ‘Instant Play’, and you’ll be able to play from your browser immediately. Perhaps you’re looking for something a bit more concrete? Then simply download the software client from our website and install it to your hard drive. Installation is a breeze, and in no time at all you will be able to play any game you so choose, with optimal graphics and the highest possible performance!

The features of playing American roulette with Jackpot Capital online casino are wonderful. With incredibly realistic graphics and sound, as well as a convenient and easy to use interface, our American roulette games represent a pleasing confluence of the classic real world experience and modern digital online style. Within just a couple of clicks you will be placing your bets and spinning the wheel. With the help of some convenient control options, such as ‘ReBet’ and ‘Autoplay’, you can easily play American roulette on your mobile, anytime, anywhere!

Our American roulette is available for free play as well as for real-money betting. So if you want to experience our games in a relaxed and low-key, risk-free manner, check out our ‘Play for Fun’ mode.

From ancient battlefields, to gold rush wagons, roulette is now easier than ever to play. Why don’t you join us today and start your winning streak?!