Be Your Own Lucky Charm this St. Paddy’s Day

Today, St. Paddy’s Day, celebrated on March 17th, is really just another excuse to get shamrocked with your mates, but this wasn’t always the case. Initially, the holiday was a strictly religious occasion, observed on the anniversary of the death of St. Patrick, the patron saint of Ireland. Many people don’t realize that until the 1970s, Irish laws required that all pubs were closed on this day, and both drinking and rowdy celebrations, with which we so naturally associate the holiday today, were highly discouraged and not at all customary. Since then, things have changed significantly of course, and St. Paddy’s Day is now observed through a variety of different customs and traditions, all over the world. At Jackpot Capital, we’ll be celebrating for a whole week with bonuses and free spins on our favorite Irish-themed slot! Check out everything you need to know to win big, this March.

St. Patrick, who lived during the 5th century, was born in Roman Britain, kidnapped and brought to Ireland as a slave at the ripe age of only 16. He eventually escaped, only to return to Ireland and was ultimately credited with introducing Christianity to the country. In the centuries following his death in 461, the mythology surrounding his life became deeply ingrained in Irish culture. One legend claims that the saint even used a three leaf clover, also known as a shamrock, to explain the Holy Trinity (Father, Son and Holy Spirit) to the people of Ireland.

Nearly two decades after lifting the alcohol ban, the Irish government realized the monetary potential of the holiday and launched a national campaign to encourage people to visit Ireland. They used the growing global interest in St. Paddy’s Day to drive tourism and showcase the country and the Irish culture to the rest of the world. Irish Pubs, now found in almost every corner of the world have also contributed greatly to spreading Irish customs. Today, people of all backgrounds celebrate the holiday, especially throughout North America and Australia, as well as many parts of Europe.

What began around the 9th or 10th century as a Roman Catholic feast day, has evolved into a celebration of Irish culture. Irish patriotism among American immigrants flourished and today St. Paddy’s Day involves parades, special foods, beer, music, dancing, and all things green. Ironically, however, the first parade held to honor St. Patrick, did not happen in Ireland but in the United States, when in 1762, a group of Irish soldiers who were serving in the English military marched through New York City to celebrate their favorite holiday. The parade, accompanied by traditional music, helped the soldiers reconnect with their Irish roots, and other fellow Irishmen serving in the English army or simply living in the United States. Today, more than 100 St. Paddy’s Day parades take place across America. In other cities, the holiday is celebrated in other ways. In Chicago, vegetable dye is released into the river to turn it green for the day, while concerts, outdoor theater productions and fireworks can be found elsewhere.

Celebrate St. Paddy’s with a Bonus! 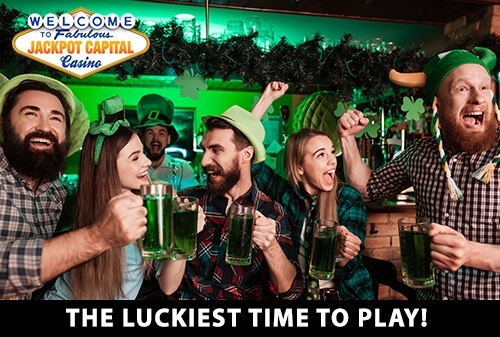 This year at Jackpot Capital, we’re feeling extra green. It may be the color of St. Paddy’s Day, but it’s also the color of money! That’s why we’re giving you an opportunity to win big and celebrate all week long, from March 13th - 20th, with bonus options and free spins available on our favorite Irish-themed slot, Lucky 6.

We’re offering exciting bonus options and free spins to all of our members. Be your own lucky charm this month! Let the Leprechauns guide you to the end of the rainbow and claim their pot of gold for yourself…

Make your deposit to get started! Lucky 6 is a video slot powered by Real Time Gaming with 6 reels and 10 pay-lines. The video slot features that lovely Leprechaun, pot of gold, and clover symbols, and utilizes 6 Scatters, which can all form wins that are then multiplied by the total bet. The Scatters are individual letters, which combined, spell out LUCKY 6. Landing four or more of these, anywhere on the reels, will trigger the bonus feature, which includes free spins and multipliers. The more Scatters you land, the better your bonus.

This March, you can also try your (Irish) luck with Lucky 8s, a virtual scratchcard from Real Time Gaming. Playing is fairly easy - all you have to do is select your wager and reveal what’s hiding underneath the scratchable pots of gold and clovers. Your lucky numbers will be hidden underneath the clovers. If they match a number hidden under one of the pots you will win the prize shown. Uncovering a horseshoe will automatically win the prize shown, while revealing a Lucky 8 sign will automatically win all the prizes on the card.

In order to get the most out of your gameplay, always make sure you take advantage of all the great bonus opportunities we offer, at Jackpot Capital! Remember, our St. Paddy’s Day Promotion is only one of the exciting bonuses we’re providing our members this March! This month, also keep a lookout for our New Game Bonus on the new La Bamba slot. Additionally, there are countless online casino bonuses available every month to be used on many of our other thrilling slots! Go ahead and visit our Promotion page today to see if any of the other bonuses catch your eye. Get Shamrocked this March!