Without any possible doubt, Halloween is one of the most recognized celebrations of the western world - certainly the most recognized one that isn’t an official holiday; but the fact that it enjoys wider recognition in the western world doesn’t mean it isn’t known in other parts. Quite the opposite, actually, Halloween has evolved to the point where its customs and traditions are known to even those people from the most remote places! Of course, this evolution took a great deal of time and had transformed the holiday to appear pretty different from how it initially did many centuries ago - and this is what we’ll be looking into as part of this post. In addition to the evolution of Halloween and its origin, we’re also proud to introduce our Free Spins Trick or Treat Halloween Bonuses! If you dare, have a read, find out how you can collect your Bonus-treats and start enjoying them today…

October 31st is only two days away and we can already picture it: the Halloween spirit all around, people trick-or-treating, dressing up in costumes, attenditing and organizing festivities, carving jack-o-lanterns and eating all those treats - even collecting Jackpot Capital’s Halloween treats! While it’s true that these are all typical Halloween customs - if not the most typical ones - the fact is that it’s only been about a century since we as humans have first adopted them. The same goes for most other things we associate with the celebration of Halloween today.

Well then, how did it all start, when and where? About 2,000 years ago, in areas of northern Europe (areas that are now Ireland, UK and northern France), which the Celts used to inhibit. For them, new year came every November 1st, a date that marked the end of summer/harvest and the beginning of winter. They believed that every night before the new year, on October 31st, the border between the world of the living and the world of the dead would open up, allowing ghosts of the dead to return to earth and cause damage to it, its people and their crops.

As means of trying to protect themselves and getting the Celtic deities on their side, the Celtic priests started organizing enormous bonfires, where people - dressed in animal skin or head costumes - burned their crops and animals as sacrifices. Their celebration - their Halloween - was called Samhain.

Fast forward to the time when the Roman Empire conquered most of the Celtic territory, and we see Samhain become combined with two Roman festivals, All Saints Day (November 1st) and All Souls Day (November 2nd). All Saints Day was also called All-Hallows, and since the Celtic Samhain was celebrated the night before, it (Samhain) became known as All-Hallows Eve and, later on, Halloween.

The holiday’s true commercialization only started in the 1900s - the costumes around the 1930s and the trick or treating around the 1950s - but it has not ended yet. The final step in Halloween’s evolution is happening as we speak, right here at Jackpot Capital, with the introduction of our Free Spins Trick or Treat Halloween Bonuses<link>, which you’ll read below! We hope you dare continue reading - otherwise you might miss out on these treats of ours… 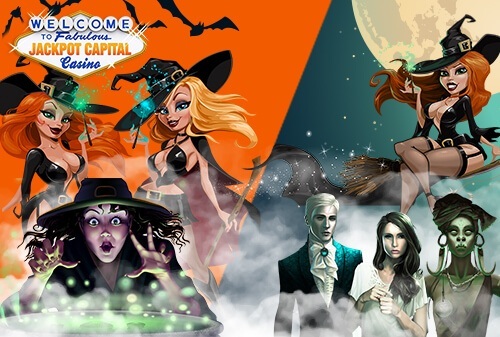 Find Your Treat… If You Dare!

So there we have it - the brief history of Halloween by Jackpot Capital. Now let us dare have a look at these new Free Spins Trick or Treat Halloween Bonuses we have on offer for you!

As you can see below, these Bonuses include Free Spins on slots Bubble Bubble, Bubble Bubble 2, Witch’sBrew, Voodoo Magic and Eternal Love. The Coupon codes for the first two are already here and ready to be turned into Free Spins, while the codes for the other two you’ll find in your email inbox tomorrow, on October 30th.

To collect these and start spinning, all you have to do is enter your Coupon code into the Cashier and make your minimum deposit of $45! Additionally, as most of you dedicated gamers already know by now, Jackpot Capital has many ongoing Promotions and Bonuses available for you to redeem at all times. To check them out, simply visit our Promotions page, pick your Bonuses like you would apples and start redeeming - and playing! Your favourite online casino wishes you a happy Halloween!