The Casino Industry Vs. Food Waste in Las Vegas!

Christmas is the time of the year to give - and of course, to receive - but let’s take a moment to remember all the people who go without either, year after year. Let’s take a moment and make use of this post to see what some of the Las Vegas casinos are doing to reverse this, making and breaking the news in regards to Last Vegas food waste. Led by MGM Resorts International, these companies are tackling what’s often referred to as the world’s dumbest problem: Food waste. As most of you well know by now, we here at Jackpot Capital love to give back as well (especially for Christmas), and with all of our constant Bonus ongoing offers - that’s exactly what we’re doing! Today, for instance, is the last day of our Christmas Bonus Bakery and the day you have a chance to redeem our last Xmas Bonus (if all previous ones have been collected). Have a read below and find out how exactly the casino industry in Las Vegas and Jackpot Capital are giving back… Las Vegas tackles the food waste, 2018 edition!

Christmas… A Time To Give

According to the Food and Agriculture Organization of the United Nations (FAO), one third of the food produced around the world - made for human consumption - ends up going to waste. That’s ⅓ of all the world’s yearly food! Over the past several years, many of the world’s more innovative companies have started initiatives that aim to tackle this. Among these are some of the biggest casinos on the Las Vegas strip, including of course, the MGM Resorts International. Though it’s still in its early stages, MGM’s food rescue program - in partnership with the Three Square Food Bank - is saving hundreds of pounds of food from being thrown away. Instead, this food is going to the people in Nevada who need it the most, thanks to these efforts by MGM and the Three Square Food Bank, an organization with a mission to “provide wholesome food to hungry people, while passionately pursuing a hunger-free community.”

Apart from MGM, they have 1,600 other community partners, which include non-profits, food distributors, media companies, schools, government entities and feeding sites. In 2017, for example, they’ve distributed over 37 million meals (more than 45 million pounds of food and grocery items)! Pretty impressive, isn’t it?

In Las Vegas - where we regularly get to see empty banquet halls and ballrooms with tons of uneaten food - this is particularly important. Especially so when there are multiple hotels in the picture and when that implies all of the minibar food (candy, energy bars, nuts, cookies and chips, to name a few), like with MGM, which saves and donates minibar food from 5 of their hotels!

While MGM was among the first casinos to get deeply involved with this initiative, they’re surely not the only ones. For instance, the Vice President of Corporate Communications for Station Casinos, Lori Nelson, stated that their company has been studying buffet waste since 2017. Already in January this year, they started changing the buffer hours to suit the hunger of their guest better, in addition to serving the food in smaller quantities and replacing it more often. This, according to Lori, resulted in a reduction of food waste at Station Casino buffets by 40%!

Similarly, the Las Vegas Sands Corp. has been donating banquet food to people in risk of hunger since 2014, said Pramav Jampani, the company director of sustainability, adding that they’re also greatly focusing on reducing food waste in their kitchens.

So how’s Jackpot Capital giving back? Keep reading and find out! 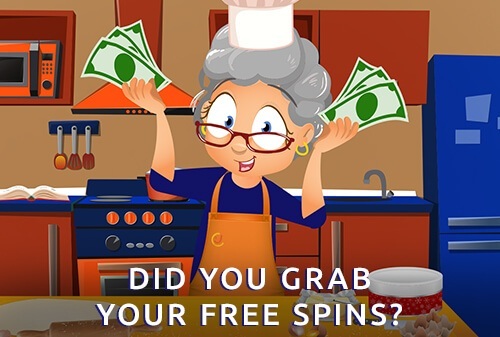 Let’s start with the most relevant - our Christmas Bonus Bakery. After 9 consecutive days of our Bonus treats (treats made with love!) for as many as 9x different games, we still haven’t given up! Until tomorrow we’ll be offering 1 last Xmas Bonus treat - freebies that you can collect if you’ve tasted all of our other Bonus Bakery treats.

And for our game - constantly updated, with one New Game every month (this month, check out the epic Naughty or Nice 3 new RTG slot!). Over the past 3 months, additionally, we’ve introduced the new RTG games like Plentiful Treasure; for the year 2019 you can be rest assured, we don’t plan on stopping any time soon. For example, Fish Catch will be published soon - stay tuned! Head over to our Games page and see what we mean!

Then our Bonus offers, like our Christmas Bonus Bakery, we always have at least one available at literally, all times! If you’re interested in checking out what else we’ve got on display, now or at any moment late on, just visit our Promotions page.

In the meanwhile, try spinning some snowy reels of some of our most popular Christmas slots, Snowmania, Santastic or the Naughty List. Merry Christmas from Jackpot Capital!