Theme of the Month: Are You Superstitious?

Google defines the word superstition as an “excessively credulous belief in and reverence for the supernatural,” while Wikipedia says it’s the belief or practice of something considered irrational. Most of us, however, tend to think of luck, prophecies, spiritual beings, witches, and so on. Of course, just the mere thought of luck then makes us all think of Jackpot Capital and getting lucky with some of our games, but that’s another topic! We also commonly associate superstition with things like Friday the 13th, black cats, lucky charms, ladders or umbrellas, among other things. As it’s now the month of Halloween, we thought it would be just appropriate to make our new Theme of the Month “Are you Superstitious?” No matter whether you believe in gambling superstitions or not, read through this blog post and learn about some of the most famous modern day superstitions and their backgrounds!

Let’s start with the idea that a black cat crossing your path causes bad luck, even though these sweet, furry creatures have been intimately close to us humans for thousands of years. In fact, 81 million cats are kept as pets in the US today! So why the bad luck? Well, it’s believed that this superstition started in the times of witch hunts, when witches were thought to be able to communicate with animals and make use of their help; and it’s because they were the closest to cats that we have this common superstition today! Too bad there are no longer witches around, otherwise we’d be seeing cats spin the virtual reels at Jackpot Capital!

Another common modern day superstition is that knocking on wood after saying something out loud that might bring bad luck or tempt fate, will ward off that bad luck. Apparently, all of this started in the ancient Pagan times, when it was believed that spirits lived in trees and that knocking on trees would show acknowledgment and invite their protection, or that it would be a thank you gesture for bringing good fortune. If you’re wondering about Jackpot Capital spirits - they live within our slots. All you’ve gotta do to invite their protection is knock on your space bar when spinning the reels!

Then there’s the idea that walking under ladders, like crossing a black cat’s path, will bring you bad luck. It turns out we do have some practical superstitions! Can you imagine what it would be like if this belief were vice versa, and if NOT walking under ladders would bring bad luck? Or if walking under ladders would simply bring good luck? Hard to even imagine! Coming back to the original superstition, there are a few theories as to how it initially came to life. One is that its roots lay in Christianity, where a connection was made between the triangle that the ladder makes and the Holy Trinity - and where walking through the triangle would break the Trinity. Another theory is that the ladder’s triangle represents the Egyptian Holy triangle, and that walking through it can break the symbol and anger the Gods.

There are naturally countless other superstitions around the world today, but we’ve decided to leave the rest for another post. Instead, we’re now going to look into gambling superstitions… Keep reading to find out more! 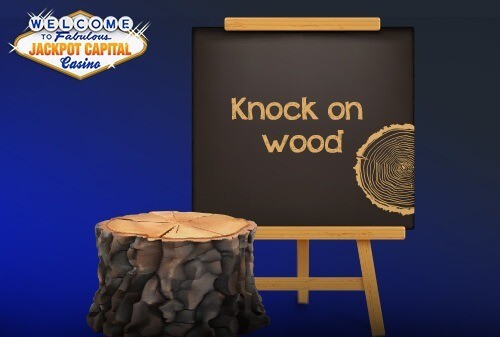 Gambling Superstitions: Be Lucky in Both!

By far the most recognized gambling superstition is that those who are lucky in gambling are unlucky in love. While we don’t really know where this saying originates from, some people have tried researching it and discovered that many successful gamblers indeed have happy, long lasting marriages and families. Anyone out there currently in love? Join us at Jackpot Capital, make some wins and disprove this superstition!

The Gambler’s Fallacy is another famous gambling superstition among players - one that has sadly already been disproven by the theory of probability. Nonetheless, people still tend to believe in it… and what’s that it? The belief that, when playing Roulette, the resulting color will be more likely to change to the opposite one if the past several outcomes repeatedly involved the same color. In reality, however, previous outcomes do not in any way influence the next. Chances stay at 50:50, regardless of the past.

As we all know, a lot of gambling that takes place, like Roulette, Dice or online slots, depends on pure chance. There aren’t really any strategies to use, and because of that, the idea of luck often reaches a brand new level. Many gamblers are known to perform rituals before games - such as, for example, crossing fingers, knocking on wood, blowing on dice or kissing a partner. Many also tend to bring lucky charms, like a four leaved clover, or even lucky friends/partners! Oh... you don’t have your ritual yet? But you absolutely must try having, at least, one! How would you otherwise know whether it works or not? Now that you’re already here, trying to use a ritual is only a few clicks away… Simply head over to our Promotions page, grab a bonus, then perform your new ritual and start playing! Be sure to stick around this month for our new bonus offers - Now’s your moment to get lucky!