Sound the gong! Prepare the offerings of pearls and coins! Because WU ZETIAN has arrived at Jackpot Capital, the newest addition to our ever-growing Casino Lobby. This one really demands attention too, and not just because of its royal theme - this is a GIANT SYMBOL SLOT with HUGE payout potential - Combine that with all these Bonus Offerings, and you'd be making a peasant's mistake by not taking Wu Zetian up on her offer of - power, money, and glory.

The real Wu Zetian is quoted saying, “Remember, when one’s aim is to achieve greatness, everyone is expendable.” So you should know going in - Empress Wu is serious about winning. And if you aspire to have gold coins rain down from the sky - and into your bankroll - the WU ZETIAN Online Slot from RealTime Gaming is probably just the game for you.

Ever wonder what it would be like to live in the Golden Age of China, all the way back in the late-600's AD? Probably not, but it's not hard to imagine how great it would be to preside over an empire that earned that nickname. With just one snap of her finger, Empress Wu could order 50,000 gold coins laid at her feet. With just one click of yours, WU ZETIAN could pay out 50,000x your line bet, filling your bankroll with gold coins.

But Wu Zetian wasn't just handed the thrown. The first and only female ruler of China for millennia? Forget about it - she had to take it. And that takes an enormous, fearless show of force…which inspired the GIANT SYMBOLS feature, where you're able to conquer several paylines and spread over multiple reels. This is like having a warrior always by your side, a powerful ally in your quest for more and more gold coins.

Besides that unique feature, most Slots fans will find the setup somewhat familiar. The Wu Zetian Giant Symbol Slot is a 25 fixed line, five-reel game - with stunning graphics that immerse you in the atmosphere - animation as smooth as it is exciting – and specialty symbols that can help you win enough money to buy all the tea in China:

Revealing three or more consecutive Gong Scatters unlocks the 5 FREE GAMES! And at least three of the reels are combined into one if you line up three scatters - and if all five Gongs trigger the bonus game - all five reels are combined!! That means five guaranteed wins in a row. But even just three combined reels with the same Giant Symbol - should pay out nicely. Very nicely. (Please note, however, that the Scatter does not pay out on the total wager like it does on some other RTG games - it simply triggers the 5 Free Games.)

The Pearls Wild symbol can replace any other symbol to create the highest paying win combination possible. (It cannot replace the Gong Scatters, though.) But they CAN appear as Giant Symbols! That's a highly-effective accomplishment, because the same Wild will apply to more lines (than it would on a Slot without the Giant Feature). And - thankfully - the Pearls Wild symbols are about as shy as Wu Zetian herself…not shy at all!

You can experience the awesome power of Wu Zetian from Mobile, Download, and Instant Play, whichever you prefer. It doesn't make a difference to Wu Zetian, that's for sure. She stays her sharp, beautiful, and unapologetically power-hungry self no matter what platform you two use to conquer the empire. The gold coins will enter your bankroll - with vividness that you want to reach out and touch. The daylight will turn to night when the 5 Free Games are triggered, further showcasing the artistry of the RealTime Gaming team. And the Giant Symbols pay out just as well whether they're on a small mobile screen or the biggest computer monitor on the market.

So you can go ahead and play now by clicking the button bellow, or you can read on to accept your gift of Exclusive Game Bonuses - free chances to win for a timeless legend: 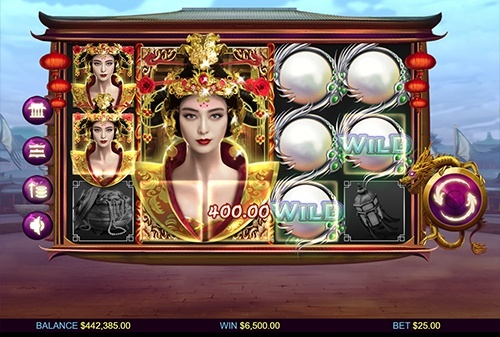 Sometimes, the difference between having something and not having something is the willingness to reach out and take it. It was true for Wu Zetian when the thrown became vulnerable to her power grab. And it's true for you, right now. Take these Jackpot Capital coupon codes - use them in the specified timeframes!! - and lead your empire to riches - riches that history will never forget.

Your game awaits, your majesty. The Wu Zetian Online Slot has the familiarity that makes it easy to start playing. (You want to be surprised by a huge win, not by an unexpected rule.) But it also has the standout features that make it a one-of-a-kind Giant Symbol Game - from the awe-inspiring settings to the 50,000x multiplier to all those Lavish Bonuses above, you have the incredible to look forward to. Now make it yours - with just one click of your finger…