Battle Zombies in our New Online Slot, I, Zombie!

Since we’ve reached the half of this year’s Halloween month, we thought the timing would be just about right to mention the new RTG slot arriving to Jackpot Capital this October - I, Zombie! This new release by Real Time Gaming is a unique blend between oriental and zombie themes; in other words, we’ve got, for the very first time at Jackpot Capital, an oriental themed zombie hunt slot! This is great news not just for those of you out there pursuing some intense, scary and creepy fun in an orientally peaceful and serene environment, but also for anyone interested in seeing RTG’s progress in terms of game graphics and visuals! Speaking of which, you should all be interested in seeing this progress - especially since it’s particularly evident in I, Zombie. Another important part about this new game are the New Game Bonuses we’ve prepared for you, with the idea of helping motivate you to explore this absolutely thrilling new game!

As we’ve mentioned above, this month Jackpot Capital proudly announces the release of one of the most entertaining and thematically innovative slots we have seen so far! We’re talking about an intersection between oriental and zombie, about a game where you’ll be travelling all the way to ancient China hoping to help three local warriors defeat their enemy army of zombies… And thus, win yourself some generous rewards! Of course, on your way there, you’ll encounter a number of our own awards for you - like you do with every new slot game we release, after all - in the form of New Game Bonuses! But more on them later…

Our new game, the intriguing I, Zombie online slot, commonly features 3 rows and 5 reels. It consists of 25 adjustable paylines and, although there’s no Jackpot, all of its symbols - other than the Scatter which pays any - pay left to right. This absence of a Jackpot, however, is quite adequately compensated by the maximum possible payout of 7,500 times your bet per line!

Perhaps the two symbols most important in our new RTG slot, I, Zombie, are its Wilds and Scatters. The Wild, which substitutes for all regular symbols but the Scatter, is represented by the I, Zombie symbol. This Scatter - the symbol responsible for triggering this game’s special Free Games Feature - is represented by a Mirror symbol, while those other, regular symbols consist of numbers and letters colored in creepy! Last though not least, present among the game’s symbols are also 3 warriors from the cover of the game: the red clothed and red eyed, confidently, spookily yet somehow still invitingly smiling sorceress; the grey haired, wise and old Sensei, and another young, female warrior, with knives and an expression opposite of inviting.

So we’ve covered the basics, the gameplay characteristics and the symbols - and now the time has arrived to get into the special features! The first can be triggered by landing either one I, Zombie Wild or one Mirror Scatter, and what it does is it reveals two extra Wilds on the same reel on which the first Wild or Scatter had been landed. The other such feature, unlocked by landing 3 or more Mirror Scatters anywhere on the reels, is called the Free Games Feature; and what this oh so special feature does is it grants you 2 Free Games for every I, Zombie Wild or Mirror Scatter that had appearing in your triggering game! Now that’s cool if you’ve triggered the feature thanks to the appearance of 3 Mirrors on your reels, but it starts getting really interesting once you manage to trigger the Free Games Feature with 4 or 5 Mirrors - when all your prizes become doubled or tripled, respectively. Moreover, landing any additional Scatters or Mirrors as part of your Free Games Feature will add another Wild to your reels! But perhaps most importantly - all Free Games are re-triggerable! 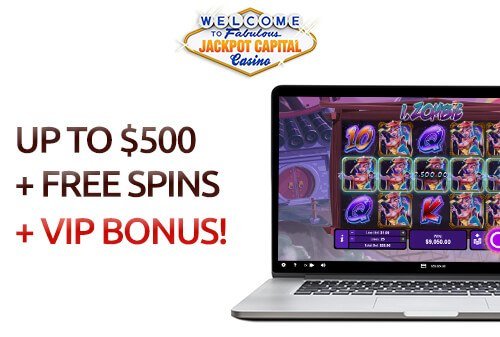 And Now… Battle for Bonuses!

Ready to finally see those New Game Bonuses we’ve been mentioning throughout this post? Well, here they are below! Have a quick look, prepare yourself for a trip back in time, a battle against zombies and some serious wins - and start spinning the reels of our new RTG slot, I, Zombie!

Between October 10th -20th, collect any or all of these battle-worthy Bonuses and play our slot, I, Zombie!

While that’s about it when it comes to the new game Bonuses we’ve prepared for the slot I, Zombie, but the truth is that these are far from being the only Bonuses currently available at Jackpot Capital. For instance, our daily Game of the Month Bonus, is available and will be available for you to redeem everyday until October 31st! Otherwise you can also simply head over to our Promotions page, check out all the Bonuses we have on offer, make your pick (or picks!) and start playing!