It would seem that after the successful release of Fantasy Mission Force, the team at Real Time Gaming is delivering on the promise they made last year - to produce a series of online slots based on Jackie Chan’s filmography! Their new game, Eagle Shadow Fist, is based on yet another movie from the actor’s early career. With wins of up to 40,000x your bet per payline, and a random jackpot of $5,000, you don’t need to be a Jack Chan fan to enjoy spinning these reels; you simply need to be a fan of winning! Get familiar with all the rules below and check out the new game bonuses that we’ve prepared for you this month. Get in on this action!

It could be argued that this new set of Jackie Chan slots from Real Time Gaming celebrates the golden era of Hong Kong action movies, more than Chan’s actual career. Although he played one of the good guys, Chan only had supporting roles in both of the films that the company has based its games on, thus far. We’re really excited and curious to see which movies will make it onto the reels next (to anyone at Real Time Gaming reading this, we’re secretly hoping to see Chan’s newest movie Kung Fu Yoga, which was released just last year, as well as Police Story, from 1985!)

The plot of Eagle Shadow Fist is set during the Japanese occupation of China during WWII, and follows the story of a group of Chinese rebels who try to expel the Japanese forces from a small town. The new RTG slot game has a rather traditional look, with 5 reels and 25 adjustable paylines. Most of the action takes place is the Japanese jungle, which is barely visible in the backdrop. On the reels, you will find Jackie Chan, a female fighter, an Asian man with a sword and another wearing a hat, as well as Ace-through-9 playing cards, which make up the low paying symbols. The Wild, depicted by the image of a fist, is a Punching Wild Double, which creates its own highly lucrative winning combinations and substitutes for other symbols. Although it cannot replace the Scatter, the Wild will always double your payout. The silhouettes of two Kung Fu fighters placed against a purple background represent the Scatter symbol. Landing three such symbols will trigger the free spins mode. Players will always be awarded 20 free spins, however the Multiplier, which is applied to the wins, depends on the number of Scatters that triggered the bonus feature in the first place. The rule is, basically, the more, the better, where 3 Scatters will double your payout, 4 Scatters will triple it, and finally, 5 Scatters will quadruple your wins. The original Multiplier will also apply to any re-triggered free spins. You can be certain that some of your biggest wins will come from the free spins round, so keep an eye out for those Scatters!

Fantasy Mission Force and new game, Eagle Shadow Fist, are some of the first of many exciting games, which will be linked to same communal Jackpot. This is what connects these Real Time Gaming slots, besides the obvious fact of revolving around the theme of Jackie Chan. The randomly triggered Jackpot can be yours after any winning spin, however, the probabilities of getting your hands on it increase substantially, the higher you make your bets! Don’t be afraid to take a risk once in a while, after all, who knows when it will pay off?

Like almost slots in these modern times, Eagle Shadow Fist is available on Instant Play, Download and Mobile, making the game easily accessible from anywhere you like. Go ahead and join Jackie Chan on his mission to win right from your couch, your bus commute to work or anywhere else, or that matter. Make sure you check the new game bonuses that we’ve prepared for you, keep scrolling and you’re in for a winning treat! 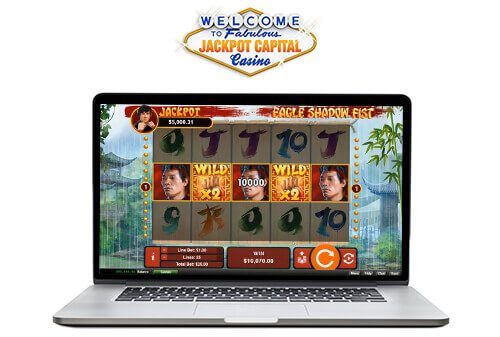 Two Bonuses to Choose From

After already playing the first of the Jackie Chan series, Fantasy Mission Force, we know you’re ready to karate chop into action, picking up even more cash and bonus wins along the way. With our new game, Eagle Shadow Fist, it’s only a matter of time until you continue your winning feat with the next thriller! Now it’s time for you to discover the new game bonuses we’re offering at Jackpot Capital online casino, to finish off this month.

Step up and get out on the battlefield, alongside Jackie Chan! Make a minimum deposit of $45 in order to start spinning on this new slot with our Regular bonus offer; or, if you’re a VIP, deposit a minimum of $100 to enjoy our generous VIP offer! To get the most out of your gameplay, always make sure you take advantage of all the great bonus opportunities we offer, here at Jackpot Capital. No matter what time of month it is, you’ll find plenty of chances to pick up some extra luck with all that we have taking place at the casino, and, on the reels! We hope you enjoy this new action slot of the series; let’s see what excitement we bring you next month. Good luck!