Discover the Bonus Treasure with Our New Game, Secret Symbol!

Prepare to go far, far back into time, all the way back to the years between the 14th and 16th centuries, when the Aztec people roamed the land which is now, Mexico. These were far from simple times, and the Aztec people certainly didn’t have it easy, but even so, they lived and thrived for many years, living off the land! The time of the Aztecs is only one for the history books, but if you’d like to take a step into what life may have been like many centuries ago, then you’ll be thrilled to join us for our brand new slot release, Secret Symbol! If you hadn’t already guessed, the Secret Symbol slot game is influenced by the long lost days of the Aztec people, and their ongoing quest and effort to form the empire we read about today. This new game is filled with thrilling bonus features that embody the true meaning of ‘adventure’, so get ready to experience what life was like in the Empire - and grab your special pre-release bonus offer!

The Aztec people were definitely not a soft bunch, as much of their history revolves around the many battles and sacrifices the people made to form what eventually became the Aztec Empire, right in the center of Mexico. That said, having such a theme for our new game, Secret Symbol, makes a lot of sense - After all, when we play, we want to have a great time, but we also want to conquer and win! Given the long history of the Aztec people, they did much of both - Conquering, and winning, although it did not come without plenty of hard work and sacrifice! Lucky for you, you don’t have to go through bloodshed to achieve your winning goals, instead, you can stay safe at home (or on mobile!), competing for your own good fortune with us!

Created by Real Time Gaming, our new game Secret Symbol offers 5 reels and 25 variable paylines, which is a standard design for the folks at RTG. The first factor that stands out with this new slot game, is the fact that the graphics are ultra-realistic, to the point of almost being life-like, and when you see the characters, for yourself, it may even be a bit frightening! Decked out in face paint and minimal clothes, the characters in Secret Symbol are, naturally, supposed to suit what the Aztec people may have looked like way back then, and if you’re anything of a history buff, this will likely bring you some amusement. Not only has RTG outdone themselves with these amazing graphics, but the slot soundtrack keeps you equally engaged and motivated, soothing the mind as you continue through this foreign land, in seek of that glorious Aztec bonus treasure! Don’t forget, we’ll be giving you your own ‘treasure’ with our dedicated pre-release bonus offer - Just keep reading to find out!

As you may or may not know, the Aztec people could be quite ruthless if needed be, as it was no simple feat for them to conquer the historical Mexican land from the American Indians. We definitely don’t condone any violence, but in perspective, having this winning ‘do or die’ attitude could definitely get you places when you’re in the game! As you may expect from such an action-packed slot theme, Secret Symbol has plenty of equally exciting bonus features, and just like the grand prize of the land, these features give you some hefty potential rewards...

To start this journey into the Aztec ‘Bonus Jungle’ off, this new game Secret Symbol offers an impressive two jackpots, both a minor and a major jackpot. Triggering either of the two is always a sign of very good luck, as you will reap the reward of $250 for the minor jackpot, and an impressive $1,000 for the major. With not one, but two chances to trigger a big jackpot win, the odds are already increasing! How do you trigger this grandeur win? Spin 5 jackpot symbols on the reels, and you’ll take home the biggest treasure of them all! Like all of RTG’s new slots, you’ll be able to play this game on Instant Play, Download or Mobile, so whichever platform you prefer, it will be a convenient moment for gameplay!

How do you feel about free games? This is definitely a feature we can all enjoy, and if you manage to line up 3 Scattered Pyramids on the reels, you’ll then activate the Free Game feature, awarding you with an impressive 10 free games! The Wild symbol, the Aztec Chief, is also an important figure in this feature, as if you manage to land the Wild Chief on reels 2 and 4 during, you can look forward to expanding Wilds covering the reels, with even more winning chances close by. After each free game, you’ll see another interesting factor of the Free Games feature, as the ‘Secret Symbol’ at the top of the game will reveal your multiplier - Anywhere from 2x to up to 20x, which is applied to all wins during that game. The fun can literally go on and on, as this special feature can be retriggered, if you’re lucky enough to land another 3 Scattered Pyramids on the reels. With so much action in an already interesting slot game, you just know that this is going to be a ‘winner’ for the game portfolio, a slot that players will surely enjoy for many years ahead! Surely, the ancient Aztec people would appreciate it! 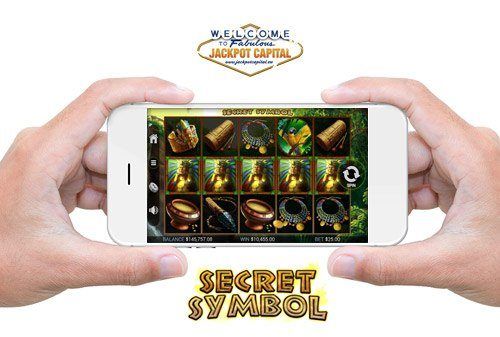 We know you must be thrilled to soon try out our thrilling new game, Secret Symbol, and there’s not many things more motivating than a special pre-release bonus offer! This exciting new slot game doesn’t go live for players until March 15th, and although we’re giving you a special bonus to warm up on your spins, there will be even more bonuses to try out this new game, come the launch date! We’re always happy to know we’ve brought an exciting new game into our portfolio, and while we of course love all of our games (that’s why we choose them!), the Secret Symbol slot game brings a lot of new excitement to the playing table, and we can’t wait for you to see for yourself!

Before the launch date of Secret Symbol, enjoy our special pre-release offer!

This special teaser bonus can be played on any of your favorite games here at Jackpot Capital, and if you’re already craving a true adventure, there’s plenty of options available to you! One of our most recent games, Funcanglong, is a total thrill ride, within itself, so if you want to warm up with a bonus battle, this is the slot to play! Additionally, hop on board the Ghost Ship in order to experience a ride with the biggest bandits of them all, the pirates! This kind of ‘hard play’ with such devious characters will prepare you for the ‘Bonus Battle’ you’ll encounter once you step into the world of the Aztecs!

With a minimum deposit of only $45, you could max out on up to $300 in bonus cash, giving you plenty of practice for the big day - March 15th! Be sure to come back and join us for more new game bonuses, and don’t forget to have fun!