Would you describe yourself as a fan of Harry Potter, or anything in the realms of fantasy, exploration and most importantly, creatures from the unknown? Perhaps you’ve already heard of the soon-to-be released and potential Blockbuster hit, Fantastic Beasts and Where to Find Them, written by J.K. Rowling, herself. This film embodies an excursion seeking out the most magnificent and well, fantastic beasts that have so far, only existed in our imagination. From a book to now, a film, you’ll soon see these fantastic beasts on the big screen, and not only that, you’ll encounter magnificent beasts on the Jackpot Capital bonus path, with our 4-week promotion, Fantastic Bonuses and Where to Find Them!

Uncover the Fantastic Bonuses - But Beware of the Beasts! 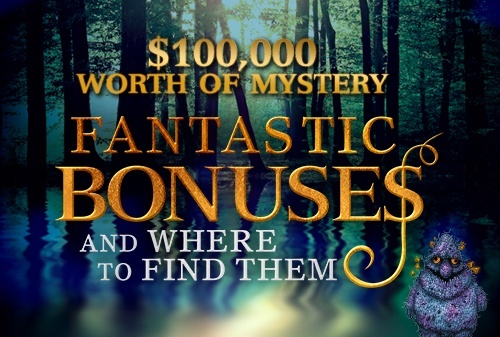 Not long after Halloween, this fantastic bonus hunt comes in good timing, as you may be over the quest for candy - but there’s always a good time to partake in a quest for bonuses! Taking influence from the upcoming movie, you’ll find yourself on an excursion like no other, where you leave the ‘normal life’ behind to gain a place in a world of fantasy. After all, who doesn’t want to flee the responsibility and hardships of everyday life?! It’s almost like being a kid again, in a new world that perpetuates a feeling of ‘freedom’ that you may only experience in your dreams - or perhaps, while reading a Harry Potter novel!

This casino bonus promotion was designed to give you that very same feeling you may miss, and miss out on, because hey, we’re adults now, and often there’s little time to ‘play’ and escape the responsibilities we sometimes feel tied down to! This is your moment to break free from the routine, taking a leap of faith that perhaps you may uncover your very own beasts - and by ‘beasts’, we mean hidden bonuses! Over the next 4 weeks, from November 7th - December 4th, we shall whisk you away into our very own fantasy world, where you can seek out ‘bonus mushrooms’ in the deep, dark Jackpot Capital forest, where the potential for financial gains are up to you - and how willing you are to explore the unknown!

What’s in it for you, if you take the brave step into the forest, acknowledging the fact that you could very well encounter a ‘fantastic beast’? Well, it’s a good thing you ask, as if you do join us on the most mystical bonus promotion we’ve had yet, you’ll stand the chance at a very ‘fantastic’ $100,000 in bonus prizes! Is that enough to entice you into the darkness, spinning your way to find the next fantastic beast, with a bonus prize as a reward? If you’re anything of a risk taker, and have a keen sense of adventure, you’ll join us for a forest mystery tour beyond your wildest imagination - with hefty bonus rewards at the end of the trail!

Check out our Video Preview from the Gamblogger!

Take Your Chance in the Fantasy Bonus Forest!

The wizard here at Jackpot Capital has now released the beasts in the Bonus Forest, and it’s up to you to dig deep enough to find them! Whichever direction you look, a beast - or a bonus - may appear, and you must remain calm and brave whilst you collect your cash prize and just keep moving. Before you know it, time will run out and the bonuses will vanish, along with the fantastic beasts who brought them there! The Express Train will get you to the edge of the forest, but you and only you can immerse yourself in the darkness, ready to take on the next conquest - whether that be beast, or bonus. Don’t be afraid, though, while these fantastic beasts look horrific and utterly scary in nature, they won’t hurt you - but that doesn’t mean they won’t put up a fight when you attempt to take their bonuses!

Take a Look at What You’ll Soon Discover…

That’s $100,000 in hidden bonuses to be found in the fantastic forest, a forest you’ll only find here with us at Jackpot Capital! The journey has only begun, and you’re here in perfect timing to hop aboard the Express Train straight towards your bonus destiny - with fantastic beasts awaiting you!

The more you play, the higher you’ll climb up our Fantastic Scoreboard for a bonus reward every Monday, giving you more bonus fuel to continue on your mission. Remember, you will need to keep yourself immersed in this expedition by playing our thrilling online casino games to heighten your chance at a Friday Random Bonus Boost, coming straight to your inbox every Friday! Do you have what it takes to make it through, to the end? Well, that’s up to you - and how much you’re willing to walk through this fantasy world in search of your piece of the $100,000 bonus prizes! Don’t delay, the bonus mushrooms are waiting!