Jackie Chan is a legend whose career spans over five decades. He has worked as an actor, a martial artist, a film director, a producer and even a singer. Therefore, it can be said, without any shadow of doubt, that Fantasy Mission Force, an 1983 horror action film directed by Kevin Chu, in which Chan starred, is definitely not one of his signature works. Yet, the cult classic has a noteworthy fanbase, popular especially amongst cinephiles who appreciate films, which are ‘so bad, they’re good’. Someone over at Real Time Gaming must be part of this crowd, as their latest release - available from January 31 - is based on exactly this motion picture! Complete with footage highlights taken straight from the original movie, this new offer is a real treat for your eye and for your pocket. You can start by adjusting your stake and deciding how many of the 20 paylines you want to play with. Check out all of the details you need to know to score big, below and get spinning!!

Welcome to the Fantasy Mission Force...

The plot of the film is fairly simple, considering its outlandish execution: Four WWII Allied Major Generals, (including one who has been named Abraham Lincoln) have been kidnapped by the Japanese. Therefore, a man called Lieutenant Don is chosen to assemble a group of eclectic misfits and killers - the Fantasy Mission Force - to rescue the generals in exchange for having their past crimes pardoned. Throughout their strenuous journey through Canada, the group comes across a variety of strange enemies such as an army of samurais, toilet-paper-throwing Amazon women, aliens, Roman soldiers, zombies and Japanese Nazis. We know what you’re thinking - how can all of these make an appearance in one film - well, we’re asking ourselves the same thing. Spoiler alert! Most of the characters are then brutally killed in the final battle, except predictably Chan, who thus far, has only appeared in the film for about 15 minutes total. Our new game, Fantasy Mission Force borrows its title directly from the bizarre feature, however in contrast to the film, the game is pretty straightforward, though similarly packed with action!

The backdrop features a battlefield, or perhaps a burning military camp, which falls in line with the overall theme of the movie, while symbols of war props fill the reels. Vivid graphics of guns, bullets, knives, and jet planes can be found alongside cartoon depictions of some of the characters from the film. Keep an eye out for the Scatter, depicted by a bundle of dynamite and the Wild, represented by a bag of money! Both these symbols will bring you the highest payouts, as they come equipped with Multipliers, potentially earning you impressive wins! The Wild substitutes for all the symbols besides the Scatter and when both these symbols appear on the reels of new game, Fantasy Mission Force simultaneously, the free spins bonus is triggered.

You’ll have 7 free spins activated whenever the dynamite lands on the first reel and the bag of money lands on the last. During this round, all your winnings will be tripled, unless a Wild was used to form the winning combination, in which case, your winnings will be multiplied by six! Furthermore, landing two dynamite symbols and two character icons, depicting the man who is holding a cigar, in the same go during these 7 spins, will earn you additional free spins! 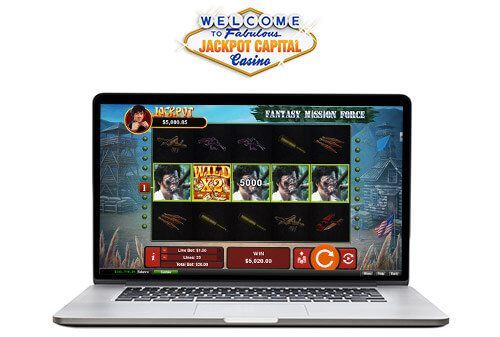 There’s really only thing we can think of that is better than free spins, and that’s infinite free spins, of course! The team at Real Time Gaming made sure it wasn’t too easy to attain, but they equipped their new game, Fantasy Mission Force with such an option through their Kaboom! Feature. The way it works, is a Bickford Fuse may be randomly added to any of the symbols on the screen. The appearance of at least 3 such icons will trigger the Kaboom! Bonus where each fuse awards 3 free spins, which can be triggered indefinitely, for wins of up to 50,000x your bet!

As if that wasn’t enough, whenever the scatter appears on the reels along with two any other character symbols, the random progressive jackpot may be triggered. This means you could win up to $5,000 or up to 50,000x the line bet, in a single spin. Rumor has it, the Fantasy Mission Force slot is only the first of several exciting games which will feature Jackie Chan and share an impressive potential jackpot; we’re excited to see if this rumor pans out to be true and if so, which of his movies have been chosen to join the world of slots! Fingers crossed!

Combined, these bonus features allow you to really score big in this new game. You don’t need to be a Jackie Chan fan or an admirer of the feature film to really enjoy this new slot from Real Time Gaming. Between Multiplier Wilds, infinite free spins and a generous progressive jackpot, this is the kind of slot that will absolutely blow up your winnings!

What are you still waiting for? Meet the misfits, join this bizarre battle, and try your luck by playing our new game, Fantasy Mission Force at Jackpot Capital - available from January 31! Remember, next week we’ll have some special new game bonuses available to you. For now, go ahead and visit our Promotion page to see if any other casino bonuses catch your eye! Good luck!