Earlier this year, on August 24th, MGM Resorts International - the company that runs the Bellaggio in Vegas - opened doors to a new casino resort in Springfield, Massachusetts. As you can probably imagine, this isn’t just any new casino on the block - it’s the most expensive casino ever built in the Northeast! With over 2 million square feet, celebrity chefs and partnerships with museums, this complex is a lot more than just a casino, which the performance of Stevie Wonder at the opening ceremony only goes to show. That said, it shouldn’t come as much of a surprise that we decided to dedicate this October's Las Vegas Lifestyle blog post to the promising, young MGM Springfield Casino & Hotel…. Keep reading and join this virtual little tour of one casino that’s surely going to leave a mark!

MGM Springfield Casino & Hotel belongs to the MGM Resorts International family of casinos and hotels, a company that runs 13 casinos on the Vegas Strip alone! These include the legendary Bellagio, Luxor and Mandalay Bay. Now, the idea behind MGM Springfield was to enter this new market with an impact, both on the economy of the region and the casino scene. With that in mind, the casino and resort were built at a cost of $960 million and now occupy 2 million square feet, covering an area of 14 acres and 3 blocks! It’s clear that MGM is placing high bets (and hopes!) on MGM Springfield - and so should you when you play your favourite games at Jackpot Capital! Because no risk - no gain…

Speaking of games, ready to hear what they’ve got at MGM Springfield? We’re talking about 125,000 square feet of casino space here, and that means 2,550 slots, 120 tables, a high-limit room and a poker room with 23 tables! Among the known table games they have on offer are Pai Gow, Roulette, Craps, Blackjack and Three Card Poker.

They also have one very special program, called M Life Rewards, through which you can receive a Tier Card that allows you to collect credits from practically every dollar you spend at the resort. Whether you’ve spent yours on slots or table games, poker or hotel, dining or spa - it doesn’t matter, because you’ll be able to turn it into credits! While these credits vary according to your membership deal, all of them can ultimately be turned into perks such as VIP Access to nightclubs, to/from the airport limousine service, personalised offers, room discounts or even priority hotel check-in. 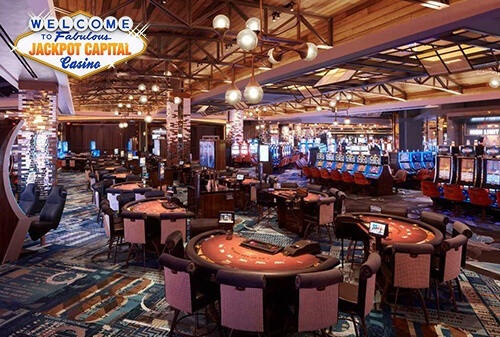 A Casino, A Museum and More!

Have we already mentioned that Stevie Wonder performed at the opening ceremony of MGM Springfield? Oh that’s right, we have… Still, though, it’s not like this isn’t something worth mentioning twice! Of course, he wasn’t the only one performing; The Dropkick Murphys, a Massachusetts based Celtic punk band, performed too, and there was also an entire parade going down the street and celebrating this grand opening. During the opening ceremony, casino players were offered to sign up for reward programs for extra points and freebies, visiting customers were free to explore the shopping area and those with children enjoyed the MGM Springfield’s Tap Arcade & Bowling.

Additionally, the complex encompases a hotel with 250 rooms and suites, 3 bars, 7 restaurant and 1 Starbucks! The cousine you can find at MGM Springfield Casino & Hotel covers everything from steak to pizza, which, once again, shouldn’t be hard to imagine... Then there’s this space of 34,000 square feet, dedicated to meetings and conventions, a movie theater, a Spa Fitness Center & Pool and a Top Golf Swing Suite.

What more is there to say? Invested in MGM Springfield were great efforts, and with all the knowledge, capital and experience involved, it’s highly unlikely that this new casino won’t blow up exceptionally quickly… In fact, they expect to bring 5-6 million visitors a year, including Cher - who will be performing at MGM Springfield in April 2019 as part of her new tour! If booking a trip next weekend isn’t really a possibility for you, why not join us at Jackpot Capital and practice your gaming skills with us until a visit to Springfield becomes a possibility? We’ve got most of the Games they do at MGM Springfield, only online, as well as countless Promotions, which we update regularly! Check them all out and start practicing today!