For the month of July’s Las Vegas Lifestyle, we discover a place you may never have thought to visit for all-out casino luxury. A place tucked away in the South Pacific, with breath-taking sights to see and a level of comfort fitting for royalty. A place that is often forgotten when discussing the most beautiful world locations, that is teeming with natural splendor! We’re talking about Auckland, New Zealand, and its world famous Sky City Grand Hotel Auckland! The very best the city of Auckland has to offer, is also the very best the world has to offer. This month we will be taking you through Sky City, from its extravagant heights to palatial spaces, showing you what it is like to live the Las Vegas Lifestyle. Sit back and relax for this ride around the world to the incredible Sky City Grand Hotel. A trip so great, you won’t be able to help yourself from getting excited about taking your next vacation there!

Hemmed in between the Waitemata and Manukau harbour, the Tasman Sea, and the Pacific Ocean, lies Auckland. An ultra-modern, cosmopolitan city that holds ⅓ of New Zealand’s population, Auckland is the sister city to Los Angeles. Nestled in a prime location, there is access to glorious nature, from amazing beaches to delectable wineries to volcanic islands, there is always something to do and see. In fact, the city of Auckland gets it character from being built on the Auckland Volcanic Field, which contains approximately 48 extinct volcanoes! Though these volcanoes are extinct, the field is not, but don’t worry, you can allow yourself to be seduced by its charm, as you’re in safe hands when in Auckland!

In the heart of the city is the Sky Tower, a 360 degree observation deck which double as a telecommunications tower. At 1076 feet, there are breath-taking views for you to take in while walking around its pergola, dining at the revolving restaurant which turns 360 degrees every hour, or taking a dive with the Sky Jump Off! But, what makes this truly stunning tower even more unique and special, is that it is also home to Sky City Grand Hotel and Casino! With something for everyone, there is an array of entertainment right at your nose when you visit Sky City Auckland, whether you’re with the family, or on an adventure in search of the “one ring” to rule them all!

Now, let’s get to the good stuff! The main feature of Sky City is the casino, itself, which houses over 1,600 gaming machines, and over 100 tables with games such as blackjack and roulette. This sleek, modern casino was most recently refurbished in 2006, so you’re guaranteed to enjoy the most up-to-date gameplay! The casino also has dozens of table in the 'Pacific Room' and hundreds of game machines in the 'Platinum Room' for those VIPs and high-stakes gamblers.

With such a diverse population in Auckland, and it’s location in the Pacific Ocean, the casino has adopted an approach of catering to every type of person from every region. The have even recently purchased a 21m motor yacht named "Horizon II" for corporate entertainment. By 2019, the complex will also house a convention centre, which will cater to 3500 plus guests with extra pokie machines (That’s what they call ‘slots’ in NZ!) and gambling tables! Sky City may already be at the front of the line when it comes to luxury and gaming, but things are clearly only getting started for them! The future is bright for this pillar in the Pacific!

This type of luxury isn’t stumbled upon, however, so why don’t you start earning your way to the life you dream of by making a win with us?! Make your way there by grabbing a bonus on us!

Lucky You! Here’s A Bonus! 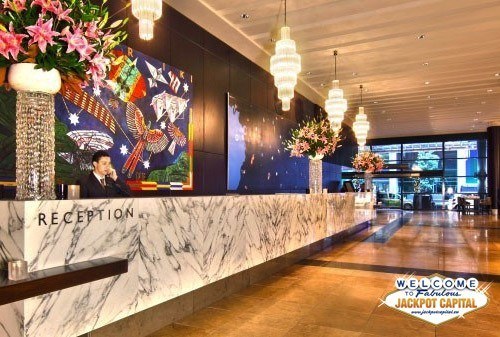 The Spectacular Lifestyle of Sky City

While the focus is on the gaming at Sky City, and rightfully so, there is much more to this heart of the city! Completed in 1997, the spectacular Sky Tower is a part of a vast luxury hotel complex and gambling center, which also serves as a convention centre.

The Sky City Grand Hotel Auckland is adjacent to the Sky Tower, and connected by a skybridge. Featuring 316 rooms on 21 levels, the Grand is a place that everyone from VIPs, high stake players, senior citizens, and the likes of Justin Timberlake go to be entertained and pampered. Of course, every room in this hotel is a luxury room, with 296 Luxury King Rooms, 8 Premier Suites, 11 Executive King Suites, and an unbelievable Grand Suite. The interiors of the room were designed by world renowned designer Chhada Siembieda, with minimal designs catered to maximize comfort. These rooms make extensive use of natural materials and modern ergonomic designs in order to reflect the hues and textures of the beautiful Auckland landscape, and its relationship with the surrounding harbour and hills.

Staying in Sky City Grand Hotel Auckland will tempt you to stay indoors all day, in order to enjoy all of these features, while you are catered to with 24-hour critically acclaimed room service and 55-inch plasma TV screens. While leaving your room may be difficult, leaving the building will prove even more strenuous, as there is a heated pool, a state of the art fitness center and personal trainers, spa and sauna, and a 700-seat theater. Want to enjoy a marvelous show but leave the kids behind? Well, there is even on-site babysitters! Be sure to take advantage of the night out and dine with perhaps New Zealand’s top chef, Peter Gordon, at his 4th incarnation of The Sugar Club, where besides a seasonal dish that will have you in ecstasy, you will be have a view of 2 oceans at once on the 53rd floor of the iconic Sky Tower! Being in such a tranquil environment, the entertainment is the type to put you at ease and allow you to relax your vacation away! That’s not to say it is not eclectic though, as you’ll be able to enjoy everything from folk rock shows, to Showgirls, to traditional Maori performances!

There is a little bit of everything for everyone at Sky City Grand Hotel Auckland, from its thrills of the casino to jumping off of the Sky Tower! Now you have more than enough ammunition for debate on the next family vacation, so it’s time for you take your life into your own hands! Go ahead and head over to our Promotions page and grab a bonus! Who knows, if you play your cards right, your vacation to Sky City may be on us!