The dragon is one of the most mythical and powerful creatures in ancient Chinese mythology and folklore, that’s a fact! Not only that, but the dragon is a symbol of great luck and strength, which certainly makes for the perfect combination if you want to note the ingredients for a ‘winner’, wouldn’t you say? Well, with our brand new game, Fucanglong, you have that perfect chance to immerse yourself in the traditions of the ancient Chinese culture, in hopes of scoring some luck on this thrilling new slot! What’s more? With the help of Jackpot Capital, you’ll get an extra good luck charm - We’re offering you a new game bonus to try out all of the amazing special features in Fucanglong! 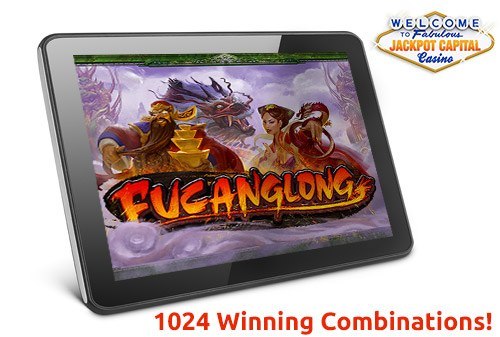 One of the first thoughts that may come to mind, is questioning such a tongue-twister name for a game title - Fucanglong. This doesn’t go without cause, though. The term ‘Fuc’ means ‘Dragon’ in Chinese, and ‘Fucanglong’ is the name used for the underworld dragon of ancient Chinese folklore, the dragon who guards all buried treasure. For a new slot game with plenty of potential bonus opportunities, this name is more than appropriate! Even more so, you’ll definitely have to play to find that buried treasure - It won’t come without a bit of effort!

The Asian and dragon-themed slots always reign popular to our players here at Jackpot Capital, as these games tend to give the perfect combination of adventure and thrilling special features. For our new game, Fucanglong, you’ll find plenty of both! Generally speaking, the dragon present in the many traditions and stories of ancient Chinese culture is a symbol of luck, along with representing power and wisdom. This is something we may see commonly used in Chinese culture, and now, you know why! Today, in the daily lives of Chinese culture, the dragon will represent those who reach their achievements, do outstanding things, giving it a very nice tone, in perspective. The undertone of Fucanglong gives a definite vibe of motivation, encouraging the will to win, and we certainly can’t argue with that!

As for the slot, itself, our new game, Fucanglong, holds plenty of lucky features that will keep you entertained, whilst you partake on this dark adventure. Created by Real Time Gaming and available on all platforms (Download, Instant Play, Mobile), you’ll find this slot follows the All Ways Pay trend, with 5 reels and 1024 winning combinations to be made. Most players are big fans of the All Ways Pay slot, and for good reason - There’s many more chances to win! Most notably, you’ll want to be sure to watch out for the Dragon, the Dragon Mountain and the Dragon Pearl - All of these symbols will lead to some potentially impressive rewards later on! Once you see the game itself, you’ll notice Fucanglong is a 3D slot with plenty of action. Did you notice the volcanoes on the screen? According to ancient Chinese folklore, the buried treasure eventually blasts out of a volcano, then making it’s way up to heaven - Or into your bankroll!

With three special features, the Dragon Mountain feature, Dragon Pearl feature, and the Fucanglong feature, there’s never a dull moment in this exciting slot game. The Scattered Dragon Mountain symbol may find its way onto the reels (the Scatter also pays for Any symbol in the game), and if you find yourself with 3 or more, you’ve triggered the Dragon Mountain special feature. You’ll then be awarded 8 free games, with any retrigger giving you 3 extra games with a 1x Multiplier! The Multiplier can go as high as 8x, with the Dragon acting as an expanded Wild, but only if 4 or 5 Scatters triggered the feature.

The Dragon Pearl special feature brings an equal amount of excitement; score 3 or more Dragon Pearl symbols, and you’ll receive another 8 free games! Not only that, but the Pearl hides a win value from 3x to 88x the triggering bet, which you’ll find out after the 8 games have been played. If the total win from the 8 free games hasn’t reached the Pearl number, then the Fucanglong feature begins! On each extra free game, the Pearl value increases from 1x to 8x the triggering bet, with the potential of the value going all the way up to 888x. Additionally, during the Fucanglong feature, the Dragon symbols expand to cover the reels when they appear, making for quite the show. Before you enter this ancient slot, though, don’t forget to grab your new game bonus! 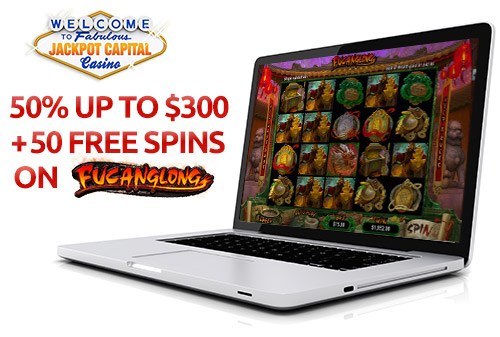 Increase Your Luck with a New Game Bonus!

You may have the massive advantage of playing a traditionally ‘lucky’ slot, in the first place, but for many, there’s never too much ‘good luck’! And that’s where we come in. Surely, after finding out about all of the thrilling features to be discovered in our new game, Fucanglong, you’re more than willing to jump into an adventure with the powerful and wise Dragon - and you should be!

Go ahead and pick up another charm of luck with us, join us January 11th - January 31st for some very powerful bonus offers, giving you everything you need to find luck in the dark and mysterious underworld. Don’t worry, this time, the Dragon’s on your side!

Take a look at the Treasure we have waiting for you!

Take advantage of this new game bonus and let the journey begin - You’ll never know if you don’t take the ride!