Just like one of our favorite winter songs, “Let it Snow”, Snowmania is here as our new game for November! It’s going to be a blizzard, alright, a blizzard chalk-filled with bonus opportunities! Looks like we’re going to cross off some wishes from your Christmas list early, as you not only have the Snowmania special features to look forward to, but also, a most plentiful new game bonus; from us, Jackpot Capital! Old Man Winter just can’t compete with what we’ve got up our woolen sleeves, so brace yourself for the storm of the year with this new online slot game, making Christmas in November anything but dreadful! Don’t worry, you don’t have to put up your decorations early - but you do have to make sure you’re in the jolly spirit to win!

It’s the month of November; snow is starting to fall, the air has a definite ‘ice’ factor, meaning it’s time to ‘chill out’ indoors and make a space for some wallet-worthy gametime! You may have been dreading this cold season, but when you get over the lack of sunshine and beach weather, you’ll surely start to appreciate all the winter months have to offer! Just think about it: You can curl up by the fire, adorned in your coziest sweater, sipping a hot tea or cocoa (or mulled wine!), and with a tablet or mobile, you can channel your attention at the best kind of entertainment! Whilst the falling snow makes a big, white blanket on the ground outside, you’ll soon realize, it’s all about Snowmania!

Available on Instant, Download and Mobile, the new Snowmania slot game follows the theme of the winter months and, of course, the Christmas season! With 5 reels and 20 paylines, your screen will be dancing with ice cubes containing bells, cuddly teddy bears, festive hollies, presents, yummy gingerbread cookies, carrots (for the reindeer, of course!) and Santa’s infamous hat - all the while, the friendly Snowman is there to keep you company! It’s almost impossible to feel ‘blue’ whilst playing this new slot game, as the music is as cheerful as the Christmas carols we know and love - without actually being Christmas carols (after all, it’s November and much too early for that!).

While you may possibly be already humming along to “Let it Snow”, Snowmania holds a whole lots of early gifts for you to enjoy! It’s important to know, with every winning combination you strike, the blocks of ice holding the cute cartoon characters will shatter, allowing for new symbols to take its place, rewarding you with Icecold multipliers! Each winning combination you make will increase these multipliers, from x2, x3, until it reaches the maximum of 5x, which is impressive, in itself! Above the reels the Multiplier meter will sit, so you can see just how far you’ve gone.

The “ICE WILD” will be present on reels 2, 3 and 4, paying left to right, adding to your collection of bonus loot whilst you playing along to the jolly tune - with the Snowman right there beside you. Remember we mentioned there were Present symbols? You’ll definitely want to be on the lookout for those (obviously!), because if you manage to spin 3 Present symbols, you’ll be happily rewarded with 10 free spins! This is when it gets really interesting. During the free spins rounds, you’ll not only have the chance to reactivate the feature, but also gain an up to 15x multiplier; now that’s ‘cool’! You may also trigger another 5 free spins during this feature, adding up the wins as fast as Santa fills a stocking!

The Goblin Blood symbol represents the Scatter, and you’ll have the thrilling opportunity to get 10, 25 or a whopping 125 free games when you spot 3, 4 or 5 Scatter symbols in any placement on the reels. Not only will you rake in a ton of free games, you’ll be doubling your prize money, giving you a whole ton of loot - Much better than candy! The Goblin Blood feature allows for the Wild Brew feature to also be triggered, which can bring a massive brew of bonus wins. Additional free games can also be won during this feature, so open your bag wide and let the wins fall in! 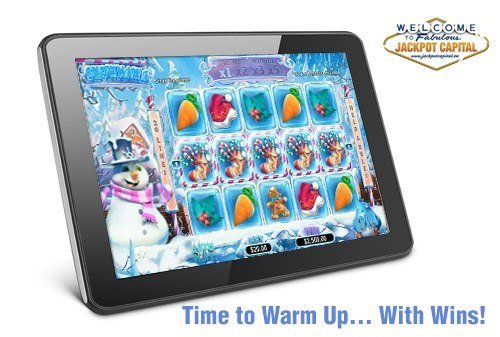 The new Snowmania online slot may bring you plenty of early presents, but here at Jackpot Capital, we’ll double that - and deliver you even more! As we do every month for our new casino game, we’re offering you a new game bonus to keep you entertained and reaping everything this cold, white season has to offer! Forget the politics, you’ve got some playing to do!

Go on and find a cozy spot to curl into, grab your mobile or tablet, and let the games begin! We’re giving you the first chance to play this ‘ice cold’ new slot game, and if you play your spins right, you’ll be ahead of the curve and on your way to enjoying this snowy month of November!

Take a look at the ‘Cool’ Bonuses we have on offer!

Don’t bother going outside at a time like this, getting ‘frostbite’ building a snowman; you can stay warm indoors with the Snowmania Snowman! This great new slot game is light-hearted, fun and overall, an amusing way to edge you into the Christmas spirit - without giving you the urge to decorate your house before the month of December has begun! There’s lots of time for that, but now, you’re better off building up your bankroll with this thrilling slot game, no scarf required! It may be a blizzard outside, but her with us, you’ll be knee-high in a bonus blizzard, and that never caused you to catch a cold! Ready to ‘cool off’? Then let’s play! Login to your account now and grab your bonus - The blizzard is waiting for you!