Theme of the Month: Harvest for Oktoberfest

The summer heat is finally fading and the leaves are slowly changing color - the harvest season is here! In the US, the beginning of fall is usually marked by Labor Day, and its end by Thanksgiving, which falls on the fourth Thursday of November. With the weather being just about right - not too warm and humid, but not yet too cold either - the early fall season tends to be the favourite time of the year for many Americans. Of course, it isn’t just the weather that makes it so appealing, there are the traditions and harvest festivals too! Read on for a summary of some of the most recognized US harvest season traditions and find out how we here at Jackpot Capital will be celebrating, as well as how you can join us!

Apple-Picking in US, Slot-Picking at JC

In most places around the US, Pumpkins are in the absolute spotlight during this pleasant time of the year. One reason for this is their nature and the fact that they ripen at this time. Another, and this one’s obvious, is that Halloween is right around the corner. As pumpkins appear in everything from pumpkin pie, bread and cookies, to pumpkin-spice lattes, we could easily say that they are the symbol of the fall harvest. As such, it should come as no surprise that we list pumpkin picking as the main harvest tradition in the US! Picking the pumpkins, however, is far from being the only feature of this tradition. Pie-eating contests, ferris wheels and tractor hay rides are all things you can enjoy at any of the countless pumpkin festivals around the states. Of course, all of that is in addition to playing your favourite slots with Jackpot Capital, on your mobile, when you need a break from the patch!

Another tradition that goes hand in hand with pumpkin picking, is apple picking. One way in which people all across the US celebrate the apple side of harvest season is by going to local farms and literally picking their own apples from the trees. As you go about picking your apples, don’t forget that the virtual doors to Jackpot Capital will be open too, and that you can stop by anytime, from anywhere, and pick some wins from our fruitful slots! Another way to go about celebrating apple harvest is by visiting one of the festivals. A great one to look into would be the Nebraska City Applejack Festival, where you can attend a marching bands parade, an apple pie baking contest and the AppleJam Carnival, and where you can enjoy some of the traditional treats such as apple pies, apple cider doughnuts and candy apples.

With Oktoberfest symbolizing the harvest season around the world in many ways, we think that the American adaptations of this celebration definitely deserve a spot here. After all, it’s only a couple of days away! The largest Oktoberfest celebration in the US is called Oktoberfest Zinzinnati. Held annually in Ohio, over half a million people visit downtown Cincinnati to enjoy German drinks, cuisine and music, as well as to partake in what is apparently the world’s largest chicken dance! Don’t like dancing, but don’t want to feel left out either? You can always try our slots Kung Fu Rooster or Hen House and replace dancing with playing! Another important celebration of Oktoberfest in the US takes place in Ohio - this time in Columbus. German music, beer, frankfurters, potato salads and schnitzels are all present. What’s peculiar about this Oktoberfest is its “Breaking of a Pretzel”, the opening ceremony which involves breaking of a pretzel instead of the traditional ribbon cutting.

These were some of the most popular harvest season celebrations in the US. Naturally, there are many, many others - from cranberry to pecan picking - but we thought we’d focus this post on the widely celebrated ones. Now that we’re done with that, it’s time to take a look at some of Jackpot Capital’s very own festivities! 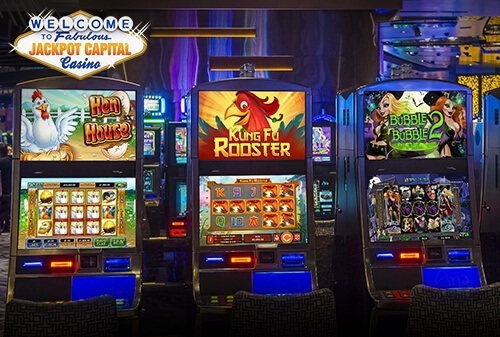 As with every month, Jackpot Capital offers one unique promotion dedicated to this September’s Game of the Month. The special game this month is Cash Bandits 2, and the promotion awards you with a 100% (up to $800) Bonus and double Comp Points! As this is a daily promotion, you can keep collecting your Game of the Month Bonus every day, over and over again, for as long as the promotion is ongoing. In this case, that’s every day until September 30th! All you have to do to get ahold of it is make a minimum deposit of $45 and enter the coupon code into the Cashier… Not a September to sleep through!

Then of course we have our Hump Day Bonuses, available to you at Jackpot Capital on every Wednesday of the month. If you haven’t already redeemed the Bonuses for the last two Wednesdays, make sure you don’t repeat the same mistake again, and collect the upcoming two! The next one will be available on September 19th - the ‘Butterscotch Pudding Day’... As if all the treats this Harvest month aren’t enough!

On Johnny Appleseed Day (September 26th), you’ll have the chance to collect our last Hump Day Bonus for this month. Since it’s the month of apple picking anyway, we’re sure you won’t forget this special day…

If you feel like you might be a little too impatient to wait for almost a week for our next Hump Day Promotion, head over to our Promotions page today and check out all the other thrilling promotions we have on offer. Hint: there’s one on Saturday already! And Sunday, for that matter… Make sure to tune in regularly, though, because we have one very special Oktoberfest Bonus coming soon to Jackpot Capital!