Play Amongst the Gods in our New Game, Asgard!

As the year winds down and the temperature drops, we at Jackpot Capital introduce to you our new game, Asgard, to warm you up with some thrilling gaming action. Get ready to join the most famous of the Norse Gods to conquer the realm, strike it big and set yourself up for some exciting hours of play. The graphics are off the charts as is the striking music, which is nothing new as this is another epic release from the talented team at Real Time Gaming. There is no letdown with this release as you join Odin, Thor and others on your adventure to huge wins. In conjunction with this amazing release, Jackpot Capital has some amazing VIP and Regular new game bonuses for you to enjoy. Check out all of the details below!

Play with the Mighty Gods in Asgard

There are certain characters that stand the test of time and are etched into the psyche, whether they be from cinema, books or legend. Prepare to join a few of these well-known characters in our new game, Asgard. The historic Gods, Odin, Thor, Loki and Freya are all there to help you on your way to score some nice wins. This sensational offering from Real Time Gaming will have you glued to the screen as you are mesmerized by the simple, yet enthralling gameplay. This 5-reel, 243 All Ways Pay slot has many bonus features and is sure to keep you coming back for more. From the wondrous graphics that transport you to the heavenly realm, to the thunderous music that sets the stage for hours of gameplay, you will not leave disappointed.

The symbols used in the game are all very much to theme, featuring hammers, runes and the like, as well as playing card symbols. The high paying symbols are the Gods themselves, Odin, Thor, Loki and Freya. The Wild symbol, called the Doubling Golden Wild, is a gold laden, rune like symbol which features the word “Wild”, that is true to its name, as it doubles any win line it is connected to, can appear on all reels and replaces all symbols bar the Scatter. The non-progressive jackpot pays out a maximum of 6,000 coins, which is more than enough to tempt even the most frugal of player. All in all, the base game is pretty fun, but of course there are some intricacies that set this slot apart from the competition.

The Scatter on Asgard is a blue stone symbol, similar to the Wild, but featuring the word “bonus” in silver lettering. Landing 5 of these will net you a cool 1250x your stake! This magic symbol is also the key to unlock the best, highest paying parts of the game, which are the special bonus features. You’ll be hard pressed to stop when you start activating feature after feature and you find yourself collecting huge wins. Let’s take a look at what makes these bonus features so attractive.

First up is the Goddess feature, that is represented by the Goddess of Love, Freya and is unlocked after the first trigger onwards. Your reward is 15 free spins with triple win multipliers! You will need to trigger this first level feature 5 times before moving on to the next, which leads to a very tempting escalation as the rewards just get better and better.

From the fifth trigger on, you will unlock the Loki’s Magic feature. This time, you are rewarded with 20 free spins and a possibility of a special Wild symbol on reel 3. If you land that Wild, there is a possibility of randomly replacing any symbol, bar the Scatter, on up to 5 reels! Plus, if you land 2, 3, 4 or 5 Bonus symbols, you will be given 1, 2, 3 or 4 more free spins. As you can see, these features really start heating up!

Next, from the tenth trigger on is the Thunder God feature. Thor makes an appearance and is as menacing as ever, while being very generous! Once this is triggered, you will be rewarded with 25 free spins plus a Wild Multiplier to boot! Whenever you spin for a win, a double or triple multiplier will appear on reels 2, 3 or 4. If the Wild Multiplier substitutes a Wild symbol, the win is then multiplied by four or six times! This can also be re-triggered, awarding up to five free games.

Last but certainly not least is the Valhalla feature, which is available after the fifteenth time triggering a bonus. This particular feature rewards you with 30 bonus spins and morphing symbols! If you hit a winning combination, you are paid, but then those symbols disappear to make way for other symbols that can make a winning combination too! Re-spins are awarded multipliers of 5 times and you can win up to 5 free games if you re-trigger the feature.

As you can see, the slot is fairly straight-forward, yet the ambience coupled with the progressive bonus features makes this a can’t miss and a wonderful addition to the Jackpot Capital slot family. As always when introducing new games, you can take advantage of the amazing VIP and Regular bonuses we have on offer. Keep reading and take a look! 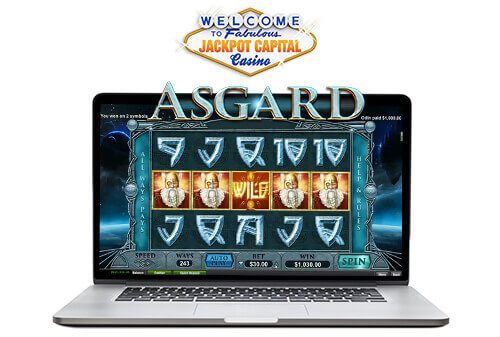 Now that you have all the info on our thrilling new game, Asgard, let’s have a look at the bonuses we have in store for you. You’ll never be without an enthralling new game bonus to kick off playing our new games here at Jackpot Capital, so get to spinning and winning in the realm of the Gods!

As you can tell, there’s plenty of bonus action to get you on the road to big wins with our new game, Asgard. Odin himself would be impressed with what we have on offer. All that’s left is for you to make a minimum deposit of $45, enter the Coupon code into the Cashier and start playing! What are you waiting for? Stop by and play today!