Plenty of Treasure in Our New Slot, Plentiful Treasure

This November at Jackpot Capital, we’re bringing you yet another thrilling new release by Real Time Gaming - our new online slot, Plentiful Treasure! Get ready to transport yourself back to Ancient China, battle the Ancient Gods for some majestic wins and let yourself go in the visually and musically soothing context of this new Oriental-themed slot. After so many successful new releases by RTG, there’s practically no need for us to reassure you about anything here - trying the slot will say more than we can here in words! Nonetheless, in this post we’ll be going through a brief review of this slot and of the New Game Bonuses which we’ve prepared for you… Keep reading and get familiar with all the details you need to play and collect your rewards!

In addition to featuring a virtual battle against the Ancient Chinese Gods for their treasure, our new online slot, Plentiful Treasure, features 3 rows and 5 reels. It follows a 243 All Ways Pays system, where all payouts are made left to right, starting with the utmost left reel. Perhaps even more interestingly that the slot’s theme and graphics, spinning these fresh new reels will give you an opportunity to win up to 4x different Jackpots and as much as 50,000 times your bet per line! More on that later on though…

When it comes to the game’s regular symbols, we’ve got the following playing cards: 9s, 10s, Jacks, Queens, Kings and Aces, as well as elements of Chinese folklore that include Bowls, Rings, Necklaces, Teapots and Caskets. Among the more important symbols in this game is the Wild - represented by the Bao, which in Chinese folklore symbolizes wealth and treasure. This Bao Wild can appear on reels 2, 3 and 4, and - pretty much like most Wilds nowadays - it substitutes for all symbols but the Scatter, which is represented by a Tripod symbol.

While the Bao Wild does seem to work in a fashion somehow regular and common to Wilds in modern slots, with the Plentiful Treasure slot game, it features a rather unusual Wild! This second Wild is represented by the Pearl symbol; it’s a Wild that still substitutes for all symbols except the Scatter (and the other Wild, Bao), but one that can only appear on reel 3 and which, in case it does appear, has the power to apply a 5x Multiplier to all wins!

The Pearl Wild gives Plentiful Treasure a special, unique touch - no doubt about that - but the full scale of RTG’s innovative approach to this new RTG online slot only comes to light with the game’s special features. The first goes by the name of Free Games feature, and can be triggered by landing 3x (or more) Scatters left to right. Achieving this (landing at least 3 Scatters) will grant you 8x Free Games in which low-value symbols do not appear. What’s more interesting is that you can re-trigger this Free Games feature if you land another 3 or more Scatters during any of your Free Games!

The second special feature, called the Gold Coin feature, can easily be added to the list of RTG’s uniquest and most exciting special features. Triggerable randomly by the Bao Wild, this golden feature will give you an opportunity to win one of the game’s 4x different Jackpots! How? By picking between 12 Gold Coins - once the feature has been triggered - and managing to reveal 3 matching deities from those 12 Coins. Which of the 4x Jackpots you’ve won will depend on the matching deities you’ve exposed, and those that you can win are known as Mini, Minor, Mayor and Grand Jackpots.

The first reason to not even consider missing out on trying this new RTG slot game are these breathtaking new and innovative special features; the second reason lies in the generous bundle of Jackpot Capital Bonuses that we’ve prepared for you, as we always do whenever we introduce a new game to Jackpot Capital… Check them out below. 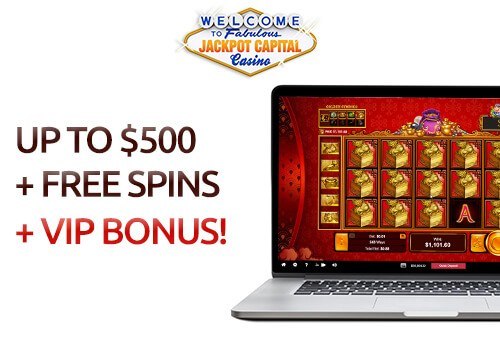 Have you realized that you’ve never had to start playing a new game at Jackpot Capital without Bonuses attached? Well, you won’t have to this time either! Have a look at the New Game Bonuses we’ve prepared for our newest online slot from RTG, Plentiful Treasure, and get ready for a trip to Ancient China!

Since you’ll be battling against the Ancient Gods for their treasure, we thought that these special Jackpot Capital bonuses would be our way of preparing you - of leveling the playing field and positioning you closer to the Gods. In order to properly arm yourself with these Bonuses, all you’ve got to do is enter the Coupon code of your desired Bonus into the Cashier and make your minimum deposit of a mere $45… Against the Gods with Jackpot Capital Bonuses just for you!