Fans of Oriental-themed slots can get ready to rejoice - this May, we’re bringing you another new release, inspired by Eastern traditions! It can’t be easy coming up with new ideas when you’re working with one of the most common themes of all time, yet somehow, RealTime Gaming manages to excel, time and time again, when it comes to design and gameplay. This week, join us on the blog for a review of the San Guo Zheng Ba online slot, where you can spin for a chance to ascend to the Emperor’s throne. Sounds a little daunting? Don’t worry, we make it a little easier with our spectacular New Game Bonuses!

The title of the San Guo Zheng Ba online slot actually translates to "The Power of the Three Kingdoms" and the story behind it, is one of the bloodiest periods in Chinese history, when 3 kingdoms went into battle in an attempt to form a new dynasty, after the dissolution of the mighty Han’s. In this new slot thriller, the emperor's power is beginning to fade and a group of ambitious generals are scrambling to organize a seize. Beat them to it, to access the riches that come along with the throne! Now’s your chance to try and take control, and win up to 50,000x your bet per line!

The Empress and several other theme-based elements make up the regular symbols in the San Guo Zheng Ba online slot, while a Golden Dragon represents the Wild, which substitutes for all the other symbols - besides the Emperor Scatter - to form winning combinations. During the main game, the Golden Dragon only appears on reel 3 and will replicate to cover all the positions on its reel.

Like most RealTime Gaming games, the our new online slot includes a Free Spins round, which is triggered by landing 3 or more Scatters. The feature awards 5 Free Spins, during which the Golden Dragon may appear on reels 3, 4, and 5, and double your winnings! During this round, landing just two Scatters will also earn you a cash prize. A maximum of 5 retriggers is available, which will only be played after the Super Spin Free Spins ends. This last feature is triggered at the end of every Free Spins round. You are awarded with 3 Super Spins, and upgrades - like Multipliers and Wild reels - can be earned, according to the amount of winning Scatter payouts, which occurred during the original Free Spins. Any Scatter pay during the Super Spins round will award you an extra Super Spin.

The San Guo Zheng Ba online slot may be a little hard to pronounce, but we promise, there’s nothing difficult about playing it! Plus, we make it even easier with our bonus incentives… (keep reading!) 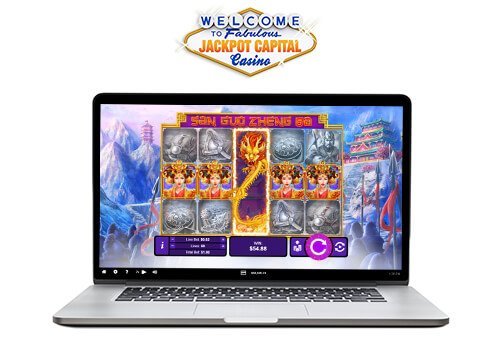 Throughout most of its history, China was ruled by dynasties and emperors. Now’s your chance to rule and lead the nation into the Bonus Dynasty! Collect your New Game Bonus between May 23rd - 30th!

Think you have what it takes to overthrow the emperor? Now’s your chance to find out! All you have to do in order to redeem your bonus, is make a deposit and enter the Coupon code into the Cashier. Make sure to also check out all our other exciting slots and table games, and remember to always take advantage of the great bonus opportunities that we offer. Head over the Promotions page, and find one that suits you best!