Flag Day is one of America's more underappreciated holidays, but at Jackpot Capital, we do not treat this glorious day lightly. Flag Day is a holiday for us to consider the price of freedom and the identity of those who fight for it. Waving through the wind as a great unifier, we are honoring it the only way we know how, with Regular and VIP Flag Day bonus offers! It pays to show respect and we invite you to do so with us. So, remember to raise your flag with brisk intention and display it ceremoniously while you enjoy this beautiful American summer that has arrived, and be sure to join us for our Flag Day Promotions! Keep your eyes glued and find out more about Flag Day, and how to salute the Stars and Stripes this holiday.

What is Flag Day?

Originally created as a form of military communication, the idea and imagination behind a flag has pushed its symbolism to great heights. The story of the American Flag is one which parallels and pushes this symbolic transformation to the forms of patriotism that we see today. Though, not much has actually changed, as since the original function of the flag was as a piece of military equipment used for identification and communication purposes, the way we look at it today is simply an abstraction of those fundamental qualities.

The history of our flag is as fascinating as that of the American Republic itself. It has survived battles, inspired songs and evolved in response to the growth of the country it represents. The origin of the first American flag is unknown, but many historians believe it was designed by New Jersey Congressman Francis Hopkinson and sewn by Philadelphia seamstress Betsy Ross.

Flag Day carries the June 14th anniversary of the Flag Resolution, signed at the Continental Congress. The Resolution stated “Resolved, that the flag of the United States be thirteen stripes, alternate red and white; that the union be thirteen stars, white in a blue field, representing a new constellation." Inspired by the preceding three decades of state and local celebrations, it wasn't officially established as a part of America until the Proclamation of President Woodrow Wilson on May 30th, 1916. Flag Day thus was celebrated in various communities for years after Wilson's proclamation, but it was not until August 3rd, 1949, when President Truman signed an Act of Congress designating June 14th of each year as National Flag Day.

As Americans, we all have a resiliency which is symbolized by our flag. So, this Flag Day, show your fortitude and take advantage of our Flag Day Regular bonus offer and VIP offer and win like an American! 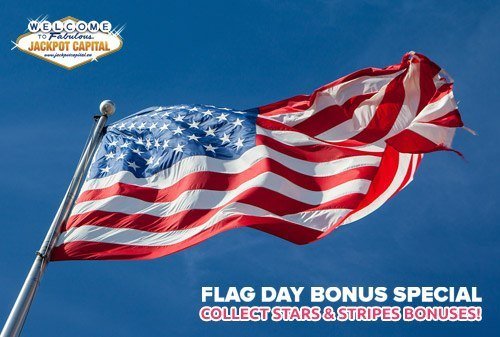 Deposit Now for Your Bonus!

Resiliency is a quality inherent to us as Americans, and the flag waves as a reminder of this. No matter how beat up you may become, you still have the ability to rise from it and stand tall. Stand tall with Jackpot Capital and take advantage of our Flag Day Bonuses!

From June 14th - 18th we will celebrate our glorious flag. Join us and celebrate like an American - by making a win!

Whether you’re an experienced player or a rookie, the flag serves as an inspiration for us to keep on going. During the 19th Century, American sea captain, William Driver flew his massive 10x17 flag through the seas, before settling in Tennessee, where he and his flag both endured and survived bombardments during the Civil War. Driver’s flag was named “Old Glory,” and after the flag escaped the War unscathed, Old Glory was adopted as a nickname for the American flag.

But, this is only one example of many where the American flag weathered the storm of war. Another, and maybe the most famous, is of after a British bombardment during the War of 1812. Amateur poet Francis Scott Key bore witness to the shelling, which lasted 25 hours, and was so inspired by the sight of the American flag still flying over Baltimore's Fort McHenry that he wrote "The Star-Spangled Banner" on Sept. 14, 1814. It officially became our national anthem in 1931.

While our flag will fly forever, our Flag Day Bonuses will not! We are sure you won’t forget about these inspiring bonuses, but make sure you follow us on Twitter and Facebook for more excitement!

Make your deposit now to receive one of our great bonus offers. Play our great games and grab a bonus! And for the VIP’s, begin your first of 5x VIP Flag Day Bonuses now, while you salute the flag!