The Top 5 Craziest Bets in Vegas!

Let’s sit back for a mental exercise for a moment. Clear your mind and think about the craziest bet you’ve ever made. Now, push it a bit further and take a minute to come up with the wildest bet you can come up with. Push your imagination a little bit. What you’ve come up with is pretty crazy, no? It can attract a sly smirk to your face and then be forgotten. But, lucky for us level headed ones, there have been plenty of crazy bets through the years for us to live vicariously through and provide entertainment along with a friendly reminder of why we don’t just go blow it all in one go at the casino. This month we will discuss what we believe to be the top 5 craziest bets in Vegas! Well, that is the most outrageous bets that have been recorded, at least!

5. Des Moines for The Win

We’re going to start our list off of the carpet floor and head to… Des Moines, Iowa. Las Vegas is renowned for its nightlife and can be quite difficult to leave once you’re used to it. Especially if you’re a high roller. This brings us to John Hennigan, the well known poker player. Hennigan has 4 WSOP bracelets and a WPT title to his name. He makes his living on the floors of casinos and he is a man who loves the Vegas nightlife.

Armed with this knowledge, his friends came up with an ambitious bet. $100,000 up for grabs if Hennigan could move to Des Moines and maintain a life there for 6 months. That sounds like a winnable bet, but Hennigan values the quality of his life more than that. It only took 2 days for him to have his fill of Des Moines, before returning back to Vegas with his head high to gladly pay his buddies their money. It definitely pays to know your friends well. Vegas may not be for everybody, but apparently neither is Des Moines.

Ashley Revell was a simple young British man who rode a Roulette wheel to fame. In 2004 he was a single guy living a normal bachelor life. He had the material possessions, the BMW, the Rolex, the golf clubs. After a night out with some friends, a talking piece stuck itself under his skin. How great would it be to go to Vegas and ‘bet everything you had on one spin.’ As he was not getting any younger, Revell put the plan into motion. Over the next 6 months he sold all of his possessions and had Sky TV following him around.

Arriving in Las Vegas with no possessions other than the rented tuxedo on his back, he was ready to put it all, everything he had, on the line. He walked to the wheel with a stack of what totaled to $135,300 and the ball was spun. But, he hadn’t decided which color to put his money on! At the last moment he finally pushed all of his chips onto red. Now imagine that feeling, with no time left to think and only the moment hanging in the air. It is pure adrenaline, pure freedom to not being tied to a single thing. The ball rattled and...7 red! He doubled his money and the insane decision to put his life on the line was a success! So, what did he do? Well, he continued being a normal guy, but now understanding that he need not be tied to possessions, he bought a motorcycle and travelled around Europe. On the trip he found his wife. What a lucky streak he was on.

Test Your Luck with a Bonus!

Sometimes when you’re down on your luck, all you need to a good gambling kick to boost yourself back up. In 1995 a Las Vegas man was struggling. He had just been booted from his house by his wife and he made his way down to the local social security office to collect a $400 check. Naturally, he took his money to the strip and ended up at Treasure Island Casino. As legend has it, he emanated a stench so bad that no one would take a seat beside him. But the cards don’t discriminate, and he went on a roll! In what must have felt like no time at all, suspended above the world itself, the $400 turned into $1 million. Apparently he completely eschewed classic Blackjack technique and rode his own strategy to victory.

But we all know what happens when you overstay your welcome at the Blackjack table. Your own strategy can only work for so long and in what must have felt like an eternity, this man watched his winnings dwindle away into thin air. By the time he was finished, he was, well, finished. He lost it all, walking away with a massive 0. And now his story lives as a reminder. The casino can be a place to reverse your fortune...but do not get greedy! 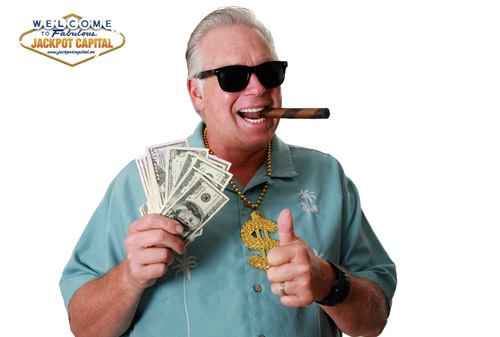 The story of William Lee Bergstrom is one firmly etched into Las Vegas lure. In the 1970’s, Benny Binion ushered in a new era of gambling as he popularized big ticket betting at his Horseshoe Casino in Las Vegas. This meant that Binion would honor a bet of any size, as long as it was their first bet placed at the Casino.

One day in September of 1980, Bergstrom entered the Horseshoe with a suitcase filled with $777,000 in cash. He bet the entire stack on one roll of craps, betting the Don’t Pass line. In a moment that backfired for Binion, the thrower crapped sevened out and now Bergstrom was in possession of 2 suitcases full of $777,000 each.

Bergstrom disappeared for over 3 years, but he was not done at the Horseshoe. This time he placed a $538,000 bet on another single roll of dice and again he won, kicking off a hot streak for the high roller, in which he won another $117,000. Some would have let this streak of incredible winnings go before going too far, but greed gets the best of some. A few months after this last victory, he returned with a suitcase carrying $1 million, and put it all, of course, on one roll of the dice. This 3rd time might have been a charm, but for Binion rather than Bergstrom, and Bergstrom lost the million. This would lead to a spiral over the following years, as Bergstrom could not get over his tremendous loss. Greed is not good, my friends.

The final of our top 5 craziest bets in Vegas, and our favorite, is truly a wild one. In the 1990’s a man by the name of Brian Zembic gained some fame by making some of the wildest bets people could come up with. Working as a magician and gambler, he had been through his fair share of fiascos, but things were about to get body altering.

After a conversation with a friend about breast implants, this friend came up with an imaginative wager. He bet Zembic $100,000 to get 38C breast implants in his chest and live with them for one full year. Now, Brian Zembic is surely no ordinary man. He took the bet on and lived the year with the breast implants. Throughout this year, he came to appreciate his new chest and enjoyed them for their ability to be a conversation piece. He enjoyed them so much so, that after the year was up, he kept the implants in his chest. To this day Brian Zembic has the breast implants. Not all bets have to hurt someone. This is a reminder that at the end of the day, it is about having fun, which is why we at Jackpot Capital have ranked it our top wild bet!

There’s no need to get too wild at Jackpot Capital, just let it ride! Join us for a bonus today, and play at your own speed while coming out on top!