Technology is moving faster than ever before; fuel-free cars, cryptocurrency (like Bitcoin - You can play with us using Bitcoin!), ultra-realistic robot humans… It’s a world we try to grasp, yet all of these changes are happening right in front of us. Come the year 2100, all of the evolutions we thought we’d never see will become a daily reality (if not sooner!). To commemorate the new year of 2017, this month’s Headline Promotion takes a massive leap into the Future, the year 2100! Join us over the next 5 weeks to explore this soon-to-be reality of the New World, but you won’t leave empty handed: We have $130,000 in bonuses to give away while you’re there! Find out exactly how to retrieve the many futuristic bonuses we have to offer, while also learning a little bit about what the actual predictions are for the year 2100! It’s fair to say, you may be surprised! 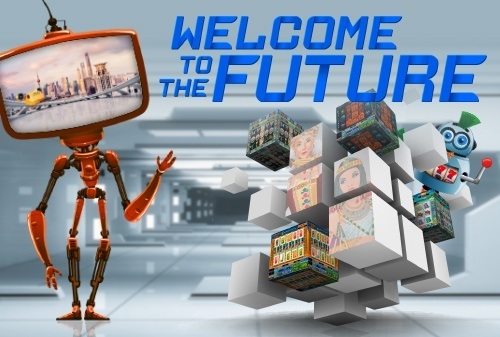 World Predictions in the Year 2100

Perhaps, by the year 2100, there will be no more need for physical money, but for now, in the year 2017, we still find ourselves normally purchasing goods and services using cold, hard cash. Based on many expert’s predictions, by the year 2100, there will be one global currency, and, as you may imagine, it will be an electronic currency. This seems like the most probable bet, but on the contrary, other experts in this area claim that the world will go in the polar opposite direction: Local currencies. At this point in time, there are many different local currencies being exchanged in both the USA and Europe, making it a tricky prediction to nail down. Your guess is as good as ours! Luckily, though, we aren’t quite there yet, and when you play with Jackpot Capital, you have plenty of banking options to choose from (take a look!).

Aside from currency, we can only imagine there are plenty more changes to come over the next 83 years. Most of us won’t be around to see it, however we will be here to see the uprise of the many events! Our Welcome to the Future promotion starts today, which means today’s a good time to get started on slaying your opponent players for the top position on the Scoreboard (you can get an up to $800 bonus!). Whilst doing so, here’s another prediction for you to process: All humans will be wired to computers in the year 2100, in order to make our brains work faster. Yes, you read that right. Future humans will, potentially and very likely, be using machine augmentation to think, feel and do all ‘regular’ things humans would do in the next century. This concept is both hard and scary to swallow, however many experts claim that this will be in action as early as 2050! With Virtual Reality on a massive uprise right now, the thought of computers thinking for us is not so hard to believe!

And what about languages? Currently there are about 6,500 languages spoken in the world, but by the year 2100, will this remain the same? Experts say, no. Even now, it is perceived that many local languages are dying, adapting to more common and international preferences. You’ll find in most places in the world, people with access to education now speak more than one language, as it is crucial to succeeding in the modern world. What languages do experts predict to exist in 2100? English, Spanish and Mandarin - That’s it! Of course, only time will tell, but this is a common future prediction which makes a lot of sense! Time to brush up on your Español!

The fun thing about future predictions, is that no idea can go unturned, and while we can certainly make educated guesses, the world moves so quickly, it’s hard to say how long these predictions will remain relevant! If anything, it’s ‘Food for Thought’, something to ponder while you’re spending 5 weeks with us, playing for a piece of the $130,000 futuristic bonus pool!

Check out our Video Preview from the Gamblogger!

Hopefully these predictions for the year 2100 didn’t frighten you too much - We’re still a long ways away! Today, we can still enjoy the nature, think fully for ourselves, use physical currency, speak in whichever language we like, and most appropriately, we can still play our favorite online casino games, anytime, anywhere! If you’re in need of some quality entertainment over the next few weeks, while also exploring the possibilities of the Future World, you’ve come to the right place.

If you take part in our Welcome to the Future promotion, you’ll have the pleasure of playing all of your favorite games, on desktop or mobile, while you pick up bonus cash for your efforts! Remember, in order to make the weekly Scoreboard and receive a bonus, you must play to build your CompPoints, boosting your ranking with every spin you make! The top 200 players who reach our Scoreboard every Monday will receive a $50 - $800 casino bonus, taking the prize of entertainment to a whole new level. You’ll also receive weekly bonuses every Thursday, and if you’re a VIP, look forward to even more bonuses on Tuesday and Saturday! All of your total bonus amounts are in detail, below!

For many, the thought of such a future is a scary one - Most of us are not prepared for the many adjustments coming our way over the next coming years! The great thing about humans is though, that we are the most adaptable creatures on the planet, and given that fact, as these predictions make their way to a reality, we’ll find ourselves adapting to what we need to, in order to survive. The human race is nothing short of amazing, as time will continue to prove!

For now, don’t get too caught up in the “what if”, and instead, let’s live in the moment and enjoy our lives in the current world where we exist! There’s no telling what will happen in the year 2100, or tomorrow, for that matter, but one thing’s for sure, today you have the chance to start your journey with us as we dive into the potential future! While you ponder these magnificent predictions, go ahead and start collecting your CompPoints, securing your spot on the Scoreboard come Monday. Don’t forget to check your emails daily, as there will be plenty of chances for bonuses whilst you travel the New World with us!

Happy 2017 to all of our players and readers here at Jackpot Capital, may your year be filled with excitement and joy - But for now, no robots!