Have you ever wondered, “What does it take to be a winner at Jackpot Capital?” We’ve certainly had a lot of successful players here, and you can bet that when this does happen, we make sure those lucky players of ours feel the glory that they deserve!

Whether these big winners are playing one of our many slots, table games or mobile games, they all have one thing in common: Luck! This week, we want to shine light on the top 5 BIGGEST winners at Jackpot Capital; who knows, next time, it could be you!

When Samantha G. won and we asked her for an interview, she was all for it, as she had actually only played the slots once before in a casino in Atlanta, and was completely blown away that she won (wouldn’t you be?!). Samantha G. recalls the moment well with Builder Beaver, stating that she landed 2 Scatter symbols (Beaver Logging Company symbol) on the reels, leading to the activated Scatter wins, scoring her the big bucks! “The reels were in my favor, I guess”, a statement said with a definite smirk on her face!

Kelly R., unlike Samantha G., is a “seasoned professional” when it comes to playing the slots. Not only that, but this is not her first time winning at Jackpot Capital! Kelly R. proudly told us, “I was just waiting to hit the 5 Volcano symbols during my Free Spins round on Henhouse; I knew this is when the jackpot would go and I intentionally made max allowed bet. I played for about 8 minutes before I reached the Free Spins round, and bang! I just got a lot happier!” Yeah, we bet you did!

Appropriately enough, Jared G.’s close friends and family now call him Mister Money - and for good reason! Jared G. is yet another “dedicated slot lover”, and he has been spinning his way to make a living for the last 5 years (which is quite impressive!). While he didn’t want to reveal too much details about himself, he mentioned the “hot spot” with Mister Money, is to trigger the Free Spins feature (by lining up 3+ Scatter symbols). Perhaps the next Mister Money will be you?! 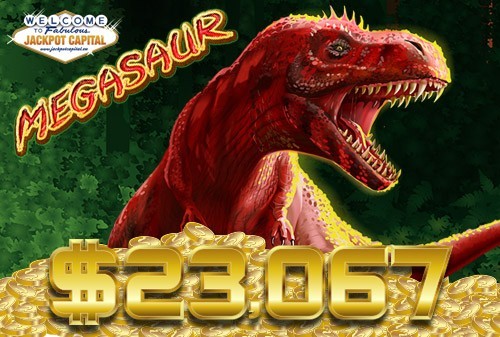 Ana K., a shy and sweet lady (we could tell right away over the phone!), was completely taken back when she won such a massive amount on the progressive jackpot with Megasaur. You can just imagine the look on her face when she entered the Free Spins feature of the game with 4 Scatter Volcano symbols, which is when the progressive jackpot is likely to hit - priceless! She proudly told us she funded her year of University with her winnings, and that’s money well spent!

Jordan K. is no stranger to the world of online casino; at the current age of 45, he had basically played some form of casino game since he was 23 years old! Jordan K. told us he had quite a good past in terms of winning, however he much prefered the modest life, without the flash. When we asked him what he was going to do with his Enchanted Garden winnings, he gave a swift giggle and replied “Retirement; and I should probably buy my wife something nice, hah!”. Good on you, Jordan K.!

Are you our next winner?! We’ll never know until it happens… so get on over, grab one of our great bonuses, and join our glorious list of Jackpot Capital Champions!