Lucky leprechauns, shamrocks, rainbows, a pot of gold and everything ‘green’; St. Patrick’s Day is one special day derived from the Irish culture, a day that is now celebrated by many, from all around the world! St. Patrick’s Day has a long history, a history that goes all the way back to 400 AD, around the time when St. Patrick, himself, was said to have been born. The saint patron of Ireland has many interesting tales of how he ended up to be such a momentous figure, and even more interestingly, as the years have gone by, our modern culture has taken on their own rituals of this beer-filled day. Let’s take a look at the most crazy and wild St. Patrick’s traditions that are in practice today, and then, grab some added good luck with our St. Patrick’s Bonus - a Pot of Bonus Gold!

For the vast majority of us, we all celebrate this green day at the local pub, downing some green beer and anything else we can get our hands on, but how many of you actually know who St. Patrick was? The biggest misconception about this famed figure, is that he was, in fact, Irish, however according to many sources, we was actually British - or even, Welsh. Once born, St. Patrick was a nobleman, giving him quite the status among the many small kingdoms, back then. His family was heavily religious, although he, himself, was not, until many years later - After he had been captured by the Irish. St. Patrick was then brought to Ireland, where he lived in solidarity for around six years as a slave, working out in the fields. Obviously not happy in his situation, it is said he was ‘enlightened’ and hence motivated to escape Ireland, which he eventually did, walking over 200 miles. He returned to Ireland and took on the position of a priest, trying to mend the hate between that of the Irish and the British. He succeeded, and many years later when he passed, that date was March 17th, the date we now celebrate his story!

2. The Green River of Chicago

One of the most well-known St. Patrick’s traditions that occurs today, is the ‘Green River’ of Chicago, in the United States. Each year, this tradition gets bigger and bigger, attracting more and more people, to the point that it has now become internationally known. For more than 50 years, two families (The Butler and Rowan families) have come together to put on this magnificent site, where the joint families then also travel down the river in their 6-person boat, dispersing the secret recipe dye. To ride this special boat is not easy, as you must be either related by blood or marriage to one of the two families; this is very much a family affair, after all! If you don’t happen to be related to either of these clans, you can join the many spectators surrounding the Chicago River, watching this momentous event.

For many of us, we likely remember celebrating St. Patrick’s Day as a kid by turning all different types of food into the color green! Sound familiar? Whether it’s green eggs and ham, or a big pint of beer, one of the most celebrated St. Patrick’s Day traditions is to turn everything green - Food and drink included! It is said that this is more of a common tradition in the United States and Canada, but in reality, this tradition reflects on a dark history of Ireland. In the 1840’s, there was a major potato famine, which resulted in the people of Ireland eating green grass to survive. Even more dampening, Irish folklore remembers this by the fact that many people’s mouths turned green as they died. Not the most pleasant history! Although, what can be taken from this, is to remember to appreciate all that we have - Like actual green food! 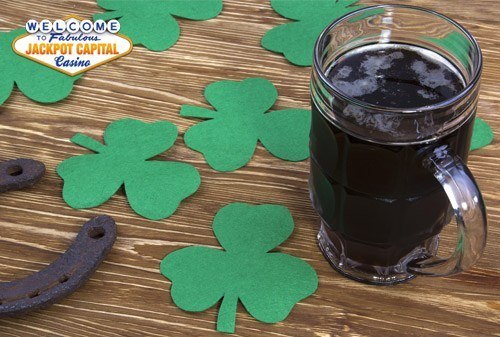 Whether you’ve made a trip to Ireland or not, it’s likely you’re familiar with their famed beverage: Guinness! Likely one of the thickest and most tasty beers out there, this is most definitely the traditional beverage of St. Patrick’s Day! Guinness was created in Dublin, where the original brewery still stands, greeting hundreds of tourists every day. This Irish stout is equally popular in the United States, as it was once recorded that Americans drink 600,000 pint of Guinness on just a regular day. On St. Patrick’s Day? That number slightly increases - to 3 million pints! Internationally, analysts estimate about 13 million pints of Guinness are consumed on March 17th - That’s a lot of beer! If you’ve got a taste for it, make sure you grab a pint, but don’t forget to pour it at a 45 degree angle!

If you’ve ever been to the Irish capital of Nebraska, O’Neill, then you may be familiar with the world’s biggest 4-leaf clover, right in the center of the city. Located right where route 281 and Highway 20 meet, you’ll find the massive 4-leaf clover painted in the middle of the road, welcoming all new visitors you pass by. There’s a history lesson to be had as well, as this historical point shines some light on the Irish history of the area, where many settlers came to discover a new home. Most notably, John O’Neill, the town’s namesake, served in the Civil war and was, of course, Irish. This town celebrates Irish history all year long, wearing green on the 17th of every month! Surely, they have some great Guinness pints!

With all of these crazy St. Patrick’s traditions, which ones do you celebrate? We love to embrace anything ‘fun’ here at Jackpot Capital, which is why we’re always ready for a celebration, no matter what the occasion! As long as it involves fun, laughter, excitement and entertainment, consider the party started!

We don’t want to leave you empty handed during this time of prosperous luck, so why not test your lucky streak and grab our 7x bonuses, the Pot of Bonus Gold! Collect all of these charming bonuses, and you’ll be pleasantly surprised - We’ll reward you with a free $150! There’s no time like the present, so let’s get started!

Collect Your Pot of Bonus Gold!