When it comes to the big screen, there have been many amazing films made on the theme of casino, and these films are usually the utmost thrilling. Many of these titles have some of the world’s most famous actors and actresses, making any Friday movie night anything but boring! Whether it be casino heists, ‘tricking’ the casino or a dangerous game of High stakes Poker with an infamous mobster, these films will surely keep you on the edge of your seat as you follow along some of the most dangerous adventures ever. Take a look at the top 7 casino movies of all time, and if you’re anything of a gambler, you’ll surely want to have a night in and catch the action - if you can handle it!

Everyone who knows a good film has a sweet spot for Kevin Spacey, and with his counterpart, Laurence Fishbourne, this film strikes all of the top spots - Especially if you’re a gambler! Interestingly enough, this film is based on a true story of MIT students who take on the world of Blackjack by learning how to read cards - which many of us know as ‘card counting’ (an illegal strategy, by the way!). While they are mastering their card counting skills in a dirty basement, reminiscent of the many scenes in ‘Fight Club’, it’s soon off to the casino to practice their illegal skill and of course, make some serious cash. At first they are making it big with wins, left, right and center, but as the casino catches on - well, this is when the real action starts! Of course, in case you haven’t seen it, we won’t spoil the end, but let’s just say the end of this thriller is not what you’d expect! You’ll be on the edge of your seat, and let’s make it clear when we say it will surely convince you to never ‘try this at home’! Throughout the film you have to keep reminding yourself - this actually happened! Furthermore, if you ever wanted to give yourself a visual introduction to Blackjack, this film is ideal - the realistic action gives you a ‘hand full’!

Here in the USA, we have a long history with casinos, both online and off, but when we cross the waters and move over to the UK, they have quite the long history of their own! Lock, Stock and Two Smoking Barrels is a British film classic directed by the infamous Guy Ritchie, and while the focus is on the great game of Poker, there’s plenty of crime to go along with it! This movie is definitely seen as a dark comedy, as the plot and theme gives an incredibly eery vibe, and yet, the comedy rings through clear - that type of dry, ‘sharp snap’ comedy the Brits are famous for. Not only does this movie encompass the world of Poker, but the world of High stakes Poker, with a group of young men, all Poker players, who manage to lose £50,000 ($62,000!) on one massive match that leaves them, well, high and dry. This money of theirs is lost to mobster, and when the men can’t pay their Poker debt, things start to get a little ugly. You then follow along on their adventure to try and, somehow, get the money owed to the Big Guy - and not in the most legit of ways. Both fun and thrilling, this film will keep you laughing - and on the edge of your seat.

Switching over to the lighter side of life, and back to right here, in the USA, comes the fast paced romantic comedy starring Nicholas Cage, Honeymoon in Las Vegas. A young Nick Cage plays the main character who, as a typical young man with a commitment phobia to his then girlfriend, ends up in Las Vegas after he reluctantly agrees to marry her, after what we can only assume was a lot of pressure. As the clever guy Cage’s character is, he manages to meet a master Poker player while in Las Vegas, where he then persuades him to rig a match where he - Oops! - loses all of his money for the wedding in the pre-planned match. It’s not just the money he loses, however, Cage even bets on a weekend with his girlfriend to the winner, which is obviously the pro player! Since, of course, Cage loses, and with the loss of a match he then loses his girlfriend, too; typical scenario in a 90’s romantic comedy, right?! Even more typically, Cage regrets his move as soon as his girlfriend leaves him, realizing how great she was, then soon off on a mission to get her back. This is definitely a film that portrays the at ease, fun Vegas, for what it is. Does he get his girlfriend back? You’ll have to watch and find out!

TEST YOUR OWN LUCK! 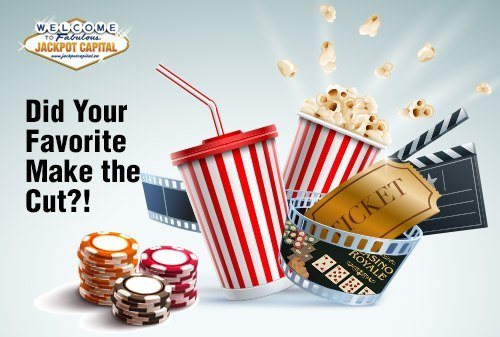 We would have never done this blog post justice if we hadn’t mentioned Casino Royale, one of the most popular James Bond movies out there! Played by Daniel Craig, this movie depicts Bond’s very first 007 mission, taking him to the beautiful Madagascar to seek out and destroy a terrorist organization. This is Daniel Craig’s first ever appearance playing the one and only James Bond, and with the film fuelled with classic gadgets and mystery, you certainly get an eye full of what the world of High stakes Poker looks like. Most notably, the film is based around one very important Poker match taking place in, at that point, Montenegro, where the terrorist group’s banker is set to play a game of High stakes Poker in order to fund a terrorist mission. In Le Casino Royale the game begins, proceeding with more dirty tricks and violence than you can imagine, defining the true meaning of ‘blood money’. How does it end? Well, you’ll just have to watch and find out!

As the name suggests, the film Croupier gives a realistic look into what life is like as a casino employee, Jack Manfred, who is played by the actor Clive Owens. Another UK-based casino movie, this film takes place in London, where there are many high rollers looking to play, day and night. The main character (Clive Owens) is a struggling writer with a severe case of ‘writer’s block’, and to keep his head afloat and food on the table, he then takes a job at a London casino as a croupier. His character is beyond interesting and this film defines the true meaning of ‘thriller’, as every scene has you on the edge of your seat in anticipation. As Jack starts his new career in the card business, he sees how much money one can make, and how exciting it can be to just be a part of the game. While he tried hard to remain professional and not get involved in the game, he gives in to the temptation, which then only gets him deeper and deeper. With the combination of love, crime and casino, this film hits all the right marks for a thrilling watch. When Jack fully immerses himself in the game, he makes some major mistakes that end up costing him more than money..!

With some of the biggest movie stars playing in this film, you just know it’s going to be a good one - especially if you like to gamble! This movie is all about a massive heist planned to steal from a very renounced Vegas casino, and the mastermind, played by George Clooney, does everything right to execute the job - well, almost. Clooney’s character is reminiscent of the late Frank Sinatra, who, in this film, is named Danny Ocean. He gathers a crew of his best criminals (including Brad Pitt!), not long after he is released from prison, in an attempt to steal the money from Clooney’s ex-wife’s (Julia Roberts) fiance, Terry Benedict. Any onlooker would agree that the heist looks next to impossible, and whether they pull it off or not, you’ll soon find out. With a full gang of professional criminals, including Matt Damon, they attempt the heist of a lifetime from three prestigious Vegas casinos, in a pursuit of $150 million. Do they make it out alive? Throw this movie up on your big screen on a Friday night and find out - and make sure there’s lots of popcorn!

Last, but certainly not least, one of the best and funniest casino and Vegas movies out there is undoubtedly, The Hangover. As you may remember, this comedy is based in Las Vegas when a group of guys venture out for the weekend for, of course, a Bachelor party. This movie definitely shows some of the worst realities of partying in Las Vegas, albeit hilarious, you may want to double think that fifth or sixth tequila shot! The plot, itself, is hilarious, but what makes for the ‘roll on the floor’ laughter is most definitely the actors. Bradley Cooper, Ed Helms (The Office) and Zach Galifianakis are the three friends who spend possibly the most wild night in Vegas, where they, somehow, lose their friend, the bachelor (Justin Bartha) after a crazy, blackout night of Vegas partying. The bulk of the film documents the men trying to retrace their hazy steps of the night before, in an effort to find their friend. Instead, they find out a whole lot more about what they did the night before, and the many antics and ‘new friends’ they encountered. If you want a serious laugh with a Vegas twist, this is a must-see!

Vegas and life in the casinos can definitely bring up a whole lot of trouble, but also, a whole lot of fun, as you may see in some of these films! Did we mention your favorite casino film, and have you seen all of these casino masterpieces? If not, we would highly recommend you spend your next weekend in, invite some friends and have a popcorn-filled movie night - perhaps with some Poker to cap the night off! If this post gets you in the spirit to play, hop on over to our Casino Bonus Promotions page, grab a bonus, and make a story of your own!