October is most commonly characterized as being the month of Halloween, but what many aren’t aware of is that October is also celebrated - throughout the USA and of course at Jackpot Capital - as the Black Cat Awareness month! The fact that the month chosen to celebrate black cat awareness is the month during which we celebrate Halloween (a holiday in which black cats are icons) is no coincidence - and neither is this month’s Theme of the Month at JC: “Are You Superstitious?” As we’ve already spoken about black cats and the superstition attributed to them in one of our earlier posts this month, in this one we’re going for the Black Cat Awareness month… And by “going for,” we mean that we’ll be exploring not only the history behind this celebration, but the black cats’ (involuntary) inclusion in the holiday of Halloween, too! We invite you to join us, learn about black cats even if you aren’t a cat lover and find out how you can celebrate and honor these peaceful, furry creatures!

Let’s start with a quote by one of the greatest American comedians of all times, Groucho Marx: “A black cat crossing your path signifies that the animal is going somewhere.” Come to think of it, it’s probably going home to get back to playing its favourite slot at Jackpot Capital! Jokes aside, the reason we chose to start with this quote, is because it’s quite related to the history of the Black Cat Awareness month. How so? Well, neither the quote nor the month of awareness would have come to life had the black cat superstition not gotten slightly out of control.

With the quote it’s quite obvious: without a widespread knowledge of the superstition, the joke wouldn’t have been funny. As for the Black Cat Awareness month, the way the quote relates to this is that it conveys the same message: the fact that a black cat might cross your path means nothing and can in no way affect a person’s luck.

This message is so important to the Black Cat Awareness month for much the same reason it started to be celebrated in the first place, and that’s the effect that mainstream acceptance of the black cat superstition has on the lives and well-being of black cats in the US. Its first effect, statistics show, is that black cats adoption rates during the year are 50% lower than cats whose fur is colored differently! The second effect is that, since so many black cats were being adopted only to serve a Halloween purpose and were abandoned afterwards, many shelters today completely stopped giving black cats up for adoption during October. This part, though, is also tied to black cats being symbols of Halloween, which in turn is connected back to the original black cat superstition. The question now is, how did black cats become icons of Halloween? Keep reading to find out! 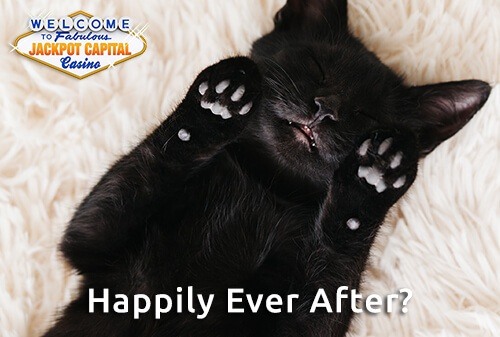 Many of today’s Halloween customs date back to the ancient Celtic festival of Samhain, but not the black cat. The Black cat entered the Halloween scene relatively recently, only once the tradition began involving witches. One theory is that people believed witches to have the power to shift shapes and go undercover as black cats. Another is that witches were thought to communicate with animals, of which mostly with black cats, and that the black cats were in charge of doing the witches’ dirty work. Whichever might be true, black cats and witches started symbolizing Halloween together!

That about sums it up as far as the Black Cat Awareness month goes. By now we assume you feel like you’re done reading and learning and are ready to start playing - Are we right? If so, you know where to go - our Games page! There you can find all the games we have on offer at Jackpot Capital, from skillful table games to thrilling online slots, you can pick and choose your favourite ones and can start playing right away. As always, our advice is to head over to our Promotions page too, because we’ve got ongoing offers at all times which you don’t want to miss! A game we would recommend? Well, that’s a no brainer - Witch’s Brew, our Game of the Month for this October! It’s true that witches might be to blame for the black cat superstition today, but what if they’re on your side?