Columbus day is a holiday that primarily celebrates two things: Christopher Columbus’ achievements - landing in the Americas - and the Italian-American heritage. It is a national holiday in many countries across both North and South America, some of which include Argentina, Brazil and Uruguay, as well as Spain and Italy in Europe. In the US, Columbus day has been a national holiday ever since 1937! As this special day celebrating the life and work of explorer, Columbus, this year falls on October 8th - tomorrow - so we thought we’d dedicate today’s blog post to Columbus Day; that means there’ll be a little history, an overview of interesting facts and an introduction of our new Columbus Day Bonuses, redeemable starting tomorrow! Read on if you’d like to know more, and remember - these Bonuses will only last for two days… Not a post to save for later!

In August 1492, Christopher Columbus, at the time just an Italian-born explorer, embarked on an expedition that would literally change the world. Backed by Spanish monarchs, his mission was to discover a western route to India and China, which, as we all well know today, was interrupted by his landing on the Bahamas on October 12th and discovering a continent previously unknown to Europeans! During the course of his lifetime, until 1506, Columbus went back and forth between Europe and the Americas another several times, but what’s interesting is that it wasn’t until his third journey that he realized the new lands he was visiting actually was not China; that they were, in fact - America!

We already mentioned that Columbus Day, today, enjoys celebrations all across the Americas, certain parts of Europe, as well as at Jackpot Capital - with our honorable Columbus Day Bonuses<link> (which we’ll get into later!). But how did it all start? Well, the very first Columbus Day celebration took place in New York, in 1792. Organized by a New York City political organization called Tammany Hall, this first Columbus day event was meant to honor the famous landing’s 300th anniversary. As of then, many Italian and Catholic communities around the US started organizing parades and religious ceremonies in honor of Columbus - who was a catholic with Italian origins.

A century later, in 1892, US President Benjamin Harrison encouraged Americans to celebrate the 400th anniversary of the famous landing with “patriotic festivities” and advocated for people to “devote themselves to such exercises as may best express honor to the discoverer and their appreciation of the great achievements of the four completed centuries of American life.”

In 1937, Franklin Roosevelt established Columbus Day as a national holiday in the US - and it’s been celebrated ever since. At Jackpot Capital, too? Well of course! Read on and find out how we’ll be celebrating this year… 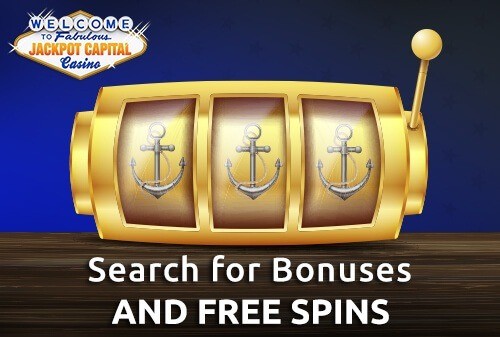 As we do with many widely celebrated national holidays, we’re honoring this year’s Columbus Day with our new Columbus Day Bonuses! Since this isn’t just an ordinary holiday - neither are the Bonuses we’ve prepared… Are you ready to discover them? To land right in between them, much like explorer Chris did with the Americas? You should be - because every discovery is a discovery!

Collect your Bonus from October 8th - October 9th and honor the Great Christopher!

While these new, remarkable Columbus Day Bonuses offer more than enough to honor the great Columbus, using them and them alone won’t be enough if you’re truly serious about stepping up your gaming skills. If you are, it might be a good idea to try spinning the reels of our Game of the Month for this October, Witch’s Brew, playing amongst the Gods in Asgard, or - if you’d prefer to stick to the exploring theme - rolling the dice in our digital board game Banana Jones and helping explorer Jones get ahold of the sacred, crystal fruit before his enemies. You can explore our very own sea of games by visiting our Games page. Remember that there are numerous other Bonus offers - in addition to our Columbus Day Bonuses - available at Jackpot Capital at all times. To see what we mean, check out our Promotions page and make some new Bonus discoveries while you savour in your Columbus day, day off!