History of Poker: An American Pastime

Poker comes in all shapes and sizes, making it one of the most quintessential American games that we have in our nation’s history. Following a true American storyline, the exact origins of poker are quite muddied, as it carries a long and varied history throughout the world. Before evolving into what is now the world’s most popular card game, poker went through many iterations across various cultures around the world. For more than 10 centuries, people have used cards, dice, and other props to pass the time and gamble. What’s crazy, is that now we can play this once dangerous game of bluffing from the comfort of our own homes while online. Read further to find out more about its rich history, and get inspired to play today!

The Many Ancient Forms of Poker

Historians now agree that the domino card game first developed by the Chinese played a heavy influence in the history of poker. Going back to the 960’s CE, legend has it that “domino cards” was invented and played by Emperor Mu-Tsung with his wife as a New Year’s Eve celebration. These cards, which have been excavated by modern archeologists, were thin pieces of paper with domino markings on them. From here we go to Egypt in the 12th Century, where Egyptians enjoyed a type of ranked card game socially, and onto 16th century Persia, where Ganjifa, or Treasure Cards, was developed. Considerably larger than poker decks, Ganjifa decks contained 96 cards made of ivory or wood filaments and decorated with elaborate designs. It is believed the game was played with rounds of betting used within a hierarchical card structure.

This is where things diverge. The 16th century Persian card game known as As-Nas, played more like 5 card stud with bluffing used as an important element of the game, developed alongside Ganjifa. Up until the 1990’s, it was widely accepted that modern poker was a direct derivative of As-Nas. However, historians now dispute this claim, and give credit to the European Renaissance game of Primero, even dubbing it “Poker’s Mother”. This was a ranked card game in which the art of bluffing and strategy of high and lows was carved. Primero led to French and German derivatives known as ‘Poque’ and ‘Pochen’, respectively. Poque became a French national pastime, and was eventually brought over to Canada by French Colonialist before making its way down to Louisiana.

Now, this is where another school of historians come in with a divergent theory. These scholars dispute the claim of poker as a derivative to Primero, and believe the way modern poker is played to be trivial in relation to past games. This modern school of thought maintains that it developed on its own and its feature to be unique to the time and place. That time and place being on the Mississippi River and the birth of poker as we know it!

Get Your Poker Face on! 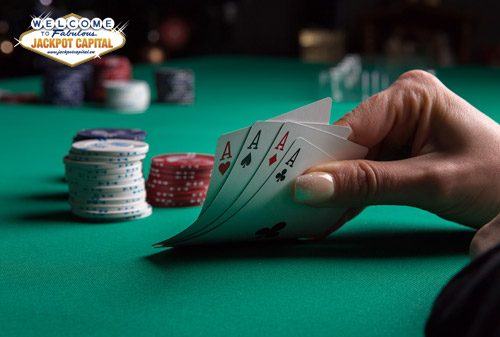 The History of Modern Poker

Though the origin story of poker lies across the globe, it truly developed in the United States. After being brought down to the New Orleans area in the early 1800’s, it began to take hold and spread north via the steamboats piling along the Mississippi River, which were used to transport goods and passengers. As people in the United States began to expand outward and travel more, people who were individualistic risk-takers, the rise of gambling spurred the spread of poker. This runs parallel to the expansion towards the western frontier, and many of the qualities we associate with poker are imprints upon our values as Americans, such as having a ‘poker face’ and keeping it cool. And there was even a democratization process involved with the spread of poker, as gamblers didn’t discriminate on the race of others at the table.

Having entrenched itself as an American pastime during the Gold Rush, soldiers from both sides of the Civil War used the game to pass the time and keep keen. In fact, everyone from gentlemen to cowboys began enjoying the fruits of the game. Not too bad for a card game that was often referred to as “The Cheating Game” by different writers early in the 19th century. By the turn of the century, saloons throughout the country had poker tables set up for their customers.

Here we can fast forward a bit. Las Vegas, which now boasts upwards of 1700 gambling outlets, opened its first licensed casino in 1931. As Las Vegas developed, so did poker, and taking cue from the way 19th century saloons in Northern California brought in various forms of entertainment and music to keep players around, Las Vegas began its journey towards being the entertainment capital it is today. Many of the most famous casinos have entwined themselves with decadent hotels and exhibit the epitome of luxury.

As different variants of poker developed, some became more popular than others due to their accessibility. Two catalysts prove vital to the atmospheric rise of poker in the contemporary world, both having to do with the Texas Hold ‘em variant. The first was the creation of the World Series of Poker in 1970 by Benny Binion. You may remember Binion from our recent post about the Top 5 Craziest Bets. There is no discussing poker without his name coming up, as he was instrumental to the rise of modern poker by creating this annual tournament. The second catalyst was the 1076 publication of, ‘Hold ‘em Poker,’ written by poker expert David Sklansky. The circulation of this book not only quantified Texas Hold ‘em, but made the game more accessible across different peoples.

Here is where we come into play. In 1999, the first internet poker room appeared. This pushed poker across new borders and put it at the fingertips of new people. As the accessibility to the game spread, television got a hold of it, and pushed things even further by televising the World Series of Poker, thus kicking off a massive boom which would resonate across the world. Poker is now at an all-time high in terms of global popularity, and a staple of the world’s culture!

From ancient Chinese Emperors to steamboats, poker is now easier to play than ever. Why don’t you join us today and start your winning streak?!