This month on our Las Vegas Lifestyle blog, we’re taking you on a trip around one of the city’s largest and best known landmarks, Caesars Palace Las Vegas Hotel & Casino! If you haven’t had the pleasure of visiting yourself, you may have already gotten a glimpse of it in countless films, like Ocean’s 11, and The Hangover. Over the years The Caesars Entertainment Corporation has grown through developments, expansions and acquisitions. Today, it operates 47 casinos in 13 U.S. states and five countries, across two continents. This week’s blog post, however, focuses specifically on the luxury hotel and casino in Paradise, Nevada, located proudly on the west side of the Las Vegas Strip, between Bellagio and The Mirage.

When in Rome… or, Las Vegas

Our Las Vegas Lifestyle blog section aims to bring you to the best luxury destinations that the casino world has to offer, and it doesn’t get much better than Caesars Palace Las Vegas Hotel & Casino! The resort was established in 1966 by Jay Sarno, who wished to create an extravagant facility that would give its guests a sense of life in the Ancient Roman Empire. It is therefore filled with statues, columns, and iconography typical to Hollywood productions at the time, which were heavily centered on the Roman theme.

The lavish decorations show that from the beginning, Caesars Palace was designed towards attracting high rollers. Caesars Forum is the original casino of the hotel, which sports 30 gaming tables and 250 slot machines which offer bets from 1¢ to $500. The modern casino facilities include games such as Blackjack, Roulette, Baccarat, Mini-baccarat, Craps, Spanish 21, Pai Gow, and Pai Gow Poker. The casino also features a massive 24-hour Poker room, which lies in heart of the gaming floor, between The Colosseum and the Race & Sports Book, where racing and sports bets can be made. It contains 16 tables with free Wi-Fi and USB charging ports. Meanwhile, the World of Poker tournament room occupies 75,000ft2 of space and can accommodate 3,500 people.

The casino at Caesars Palace is completely sealed off from any outside light, which makes it very easy to lose track of time and - perhaps, during an especially heated match - even space! 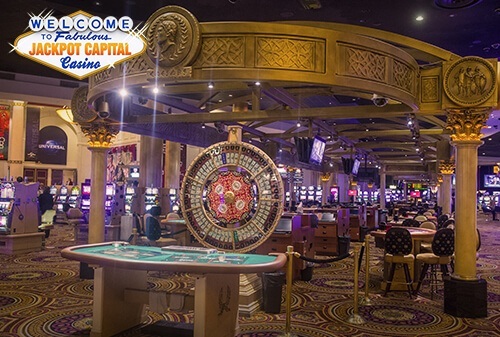 Sarno set out to impress. Caesars Palace Las Vegas Hotel & Casino features marble, which was imported from Italy, rosewood from Brazil, and gold leafing throughout the entire resort. You know what they say - do like the Romans do! Statues of Julius Caesar and emperors such as Nero and Augustus are common here, but you will also find a 25 ft statue of the goddess Fortuna, and a statue of David that is an exact replica of the 16th-century masterpiece by Michelangelo, measuring 18 ft and weighing more than 9 tons! Some Roman statues were even imported from Florence, valued at over $150,000!

The original hotel tower had 680 rooms, some of which were characterized and popularized for their fully mirrored walls. As of 2015, the hotel has 3,960 rooms and suites in six towers and offers penthouse and villa suites named after notable Romans. Unlike many other locations on the strip, Caesars Palace Las Vegas Hotel & Casino doesn’t offer a SPA but the hotel does feature an especially large range of restaurants. Several serve authentic Chinese cuisine - a favorite among wealthy Asian gamblers - but there is also a Gordon Ramsay Pub & Grill and a Payard Pâtisserie & Bistro, which encompasses a pastry shop, a chocolate shop, and restaurant. More importantly, the bistro features a 16 ft high chocolate clock that releases three chocolate truffles every quarter-hour!

The Caesars Palace Las Vegas Hotel & Casino is also well known for its entertaining shows and has hosted many international performers, from Frank Sinatra to Celine Dion. Its massive Omnia nightclub, opened in March 2015, replaced Pure, a nightclub which operated there for over a decade. Without a doubt, this is an absolutely iconic establishment that will complete any Las Vegas visit! Whether you’re planning a trip this summer or simply dreaming about one, try playing at Jackpot Capital today! You just might make a quick buck on one of our slots or table games... Enough to get you to Vegas? You won’t know till you try! Make sure to visit our Promotion page to see if any of our bonuses catch your eye! (And, check out our latest winner… Over $500k won!)