Kick It with Our New Game, Kung Fu Rooster

2017 is the Year of the Rooster, according to the Chinese calendar, and in celebration our friends over at Realtime Gaming have created a great new game, Kung Fu Rooster, for you to enjoy! Kung Fu Kenny The Rooster has been fighting to bring you the best and biggest bonuses, and he’s delivered! Clear away any poor fortune and make room for prosperity in the Year of the Rooster, by collecting our new game bonuses! We’re excited to introduce you to this new member of our slots family, and we’ve got this special treat for you to collect and set you on the road to good fortune, while getting acquainted with this kickin’ new game!

For several millennia now, Chinese empires have used a lunar calendar to mark the passage of time linked to astrological patterns and agricultural production. While modern China has adopted the Gregorian calendar, they still continue to use this lunar calendar to maintain their ancient traditions. The start to the Chinese New Year takes place during the second new moon of the Winter Solstice, during the first of the two springs that the calendar marks. This was set up in order to give the farmers a rest before the harvest, while they prayed for a fruitful year. Just like how the Chinese Emperor’s set up their farmers for prosperity, we’re doing the same for you with our new game bonus offers!

This current year began on January 28th, 2017, and is transitioning from the Year of the Monkey, to the Year of the Rooster! The Yin to the Monkey’s Yang, this year’s Rooster represents an awakening where success may not be guaranteed, but due to its leadership tendencies, courage, and bravery, it uses its patience and hard work to achieve success. Where the Monkey can be reckless and unsettling, it inspires the Rooster into action, as in the ancient Chinese tales where the Monkey shocks others with its crude antics, thus showing us where it is that we don’t want to go.

The Rooster welcomes the rising sun into each day and embodies a fresh energy of optimism, committed to action. Given that the ruling element of this year’s Rooster is fire, it means that it’s even more important to prioritize hard work and commitment. But, lucky for you, the Rooster also symbolizes luck and good fortunes! Take this as a sign to push yourself into action, and use new game, Kung Fu Rooster, to gain momentum! This stunningly attractive game is filled with features for you to take advantage of.

Taking its cue from the Chinese zodiac signs, there’s dramatic Chinese inspired music keeping you in the zone while you spin 5 reels, and look for winning combinations across 12 paylines. A fun range of symbols, including the Rooster, Monkey, and Yin Yang icon accompany you along your spins spree and provide robust payouts. The Rooster plays the Wild, substituting itself for all other icons, to help you form winning combinations. Though, the Rooster doesn’t stand for the Monkey, who plays as the Scatter symbol, throwing the game into chaos and working to multiply your odds to massive proportions. When you land 3 Monkeys, 25 free spins are triggered, which has another lucrative feature, the Fire Claw Multiplier! This is a random feature which, once activated, begins an ascent of multiplying your payouts by 1x with each subsequent spin. So, on your first spin, you get 1x, your second 2x, third 3x, and so on. This gives you the potential of reaching a 25x multiplier prize, with a top prize of 50,000x your line bet! As usual, RTG’s new game, Kung Fu Rooster, is playable on Instant Play, Mobile, or by Download! 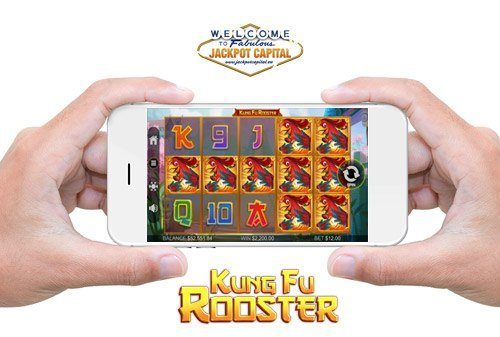 As you can see, our new game, Kung Fu Rooster is no different from the rest of our famous games. That means, of course, that it comes with a kick off special! Now that Kung Fu Rooster is live, there will be plenty of massive new game bonuses to keep up the fun times! With such exciting bonus features, along with frequent, high payouts, and incredible bonus offers, what more could you ask for?!

Your free spins bonuses are there to ease you into this new game, and get the hang for it, before diving in! Your deposit bonuses are more versatile though, as you can use these on any game you’d like at Jackpot Capital! Cuddle up with the adorable Purrfect Pets, or make a mad cash grab with Cash Bandits 2!

Deposit a minimum of only $45, and you could max out on up to $500 in bonus cash with our Regular offer! Don’t forget to come back and join us for more new game bonuses, as we’re always thinking of ways to make you happy!