Get in on the Loot with our New Game Cash Bandits 2!

The bandits are on the loose, and rumor has it they are approaching our neck of the woods. Don’t worry though, they are not out for you because they come in peace. Instead, they want you to get in on their spoils of victory, as we get ready to launch our new game, Cash Bandits 2! After the success of their first go ‘round, they are back at Jackpot Capital, with the help of those over at Real Time Gaming. Given the nature of their visit, it’s only right to offer up some treats of our own in order to get you in the mood for all the fun to come. Join us for a pre-release new game bonus, and get warmed up for all the raiding you’ll soon be doing with your new friends, the cash bandits!

Unlock the Bonuses of Cash Bandits 2!

We have an image in our minds of the bandits being a pair of meaty men in black and white attire, tip toeing their way through bank vaults with a sack hanging from their hands. But this isn’t always the case, as sometimes it is those in suits, looting mortgages, short selling stocks, and betting on bubbles to burst. This is why the cash bandits are on their way back, to play Robin Hood and pass out some of their “earnings!”

Who else but those magicians over at Real Time Gaming to create such a fun and wacky game like Cash Bandits 2?! By now you know the drill, as this is another impressive effort by the developers at RTG, and you should be as excited as us for the exciting gameplay waiting for you at Jackpot Capital. Standard gameplay for these games are 5 reels and 25 variable paylines, and Cash Bandits 2 is no different. But of course, standard isn’t a placeholder for boring, as the rewards and bonus features are what set this game apart from the rest. Sitting at the face of a bank vault in between golden pillars, you will be spinning your way to victory with left to right payouts and progressive jackpots.

Speaking of jackpots, strike the minor Jackpot and you will receive a $250 reward. Not too shabby, but hit the major Jackpot and receive $1000! Simple isn’t plain, and there are plenty of fun graphics to behold while getting your game on and waiting for the upgraded Wild to appear. Now, The WIld will be grouped on all reels, substituting itself in place of all other symbols for a chance for some criminally big wins! But there is one exception, and that of the Robber symbol, which plays as a scatter and unlocks the awesome Vault feature. This is where things get real interesting. When triggered, 5 vaults and a keypad are revealed, each vault requiring a random 1-5 digit code to open, awarding an initial 5 free games with a 2x prize multiplier. Completing the digit combinations will crack this feature and give out incredibly tempting rewards, with the chance to unlock prizes ranging up to a staggering 190 Free Games, and payout at 17x! Woah, now that’s what we call massive payout, worthy of a heist.

With prizes this huge, we don’t need to give you any more incentive to play, but we here at Jackpot Capital are dedicated to starting you off with luck on your side, and we have a pre-release bonus offer just for you! The glitter and glamour of your potential winnings really sets this game a part, and the relaxing, smooth interface is as user-friendly as it gets, whether you’re playing on Instant Play, Mobile, or by Download! No need for stress here, just sit back, relax and enjoy the game. 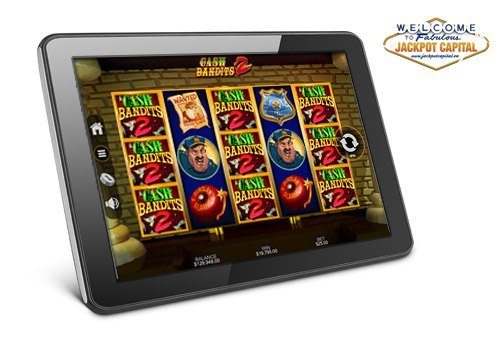 One of the many reasons why we are so popular here at Jackpot Capital is because of our refreshing new games and the new game bonuses they are always coupled with! Our new game Cash Bandits 2 is certainly no different, though clearly you don’t need too much more motivation to play our exhilarating new game, but we’re only getting warmed up. Remember this is only the pre-release special! After Cash Bandits 2 launches on June 21st, there will be tons more bonuses to keep the fun times running. With a game so thrilling, bonus features galore, and high payouts being spat out at a rapid pace, what else is there to ask for in a slot?!

Get going with our pre-release offer and kick yourself into gear by playing with your deposit + free spins bonus! Free spin yourself into victory with our cute, cuddly, yet thrilling new slot game from last month, Purrfect Pets! As for your 50% deposit bonus, well you can use these on any game you like here at Jackpot Capital! Join the party and take a swing with a recent favorite, Popiñata, a fun time to get you into fiesta mood! Or get your adventure on with Secret Symbol, another new game of ours full of adrenaline, complete with daring journey. You’ll get so lost in our great games, that you won’t even realize the time passed before Cash Bandits 2 is released!

Deposit a minimum of only $45 to receive your pre-release bonus! And stay tuned for our upcoming new game bonuses that will be released alongside of Cash Bandits 2! We look forward to seeing you then, but forget to join in on our pre-release bonuses now starting June 12th!