Cinco de Mayo may be a month away, but what better way to get ready for the festivities than to pop in and play our new game, Popiñata! While the tradition is associated with our friends south of the border, the piñata has become a ubiquitous part of our festivities over time. Bat in hand and candy splattered everywhere, it is obvious why the celebratory swinging has stuck around for so long. Remember the feeling in the moment of finally cracking open that stuffed donkey hanging in front of your blindfolded face? That moment when the body burst and all your friends dropped to a scramble? Well now you can come and relive all the fun, adrenaline inducing moments again while enjoying our pre-release game bonus!

The piñata has a long and storied history. First brought over to the Americas by the Spanish in the 16th century, the origin tales are quite varied. It seems that the idea of cracking open frilled containers in celebration of holidays was a part of humanity’s universal consciousness, as east to west there is record of it occurring. Kind of like humanity’s widespread desire to make gambles and game throughout history, it has been a part of shaping who we are today. This makes for what should be rather obvious, piñatas and slots are a match made in party heaven! It is not all about fun, of course, and Popiñata is made to maximize your winnings as you work through the party lights bat in hand.

Popiñata, created by our friends at RealTime Gaming, is everything we have come to expect from RTG over time. With 5 reels and 10 variable paylines, it is a little bit off of the standard you are used to, but they make up for it with rewards special features. As always, top quality graphics are abound in this game, jumping out at you from a starry night sky. Piñatas have become well known for their elaborate designs, popping colors which widen eyes in anticipation for the spoils of rewards waiting to flow from their bellies, and this game is no different as festive piñatas bubble by with exuberant colors, just waiting to explode with each and every win. And the piñatas aren’t limited in their ranges either! Lit cacti stand guard to rolling sombreros, chili peppers, firecrackers, and of course some tequila! But what would a fiesta be without a Mariachi band rattling away through the night? Good thing the folks at RTG know the deal, and mariachi music sets the mood for us to have some fun. And we here at Jackpot Capital are dedicated to setting the party off right, as we have a pre-release bonus offer just for you!

Now that we are in the party mood, it is time to get into a swinging groove. But before swinging away, let’s get you informed on the spoils of the game. With a modern interface, Popiñata is a sleek, simple, and easy game which allows you to effortlessly place bets and spin the reels. This allows you to sit back and get into a head nodding rhythm while playing. With a top payout of 250 times the line bet, increasing your bets is not only tempting, but well worth the risk! And betting the max can bring in dizzying amounts of cash. When spinning the slots you will have tons of opportunities to win, as the game pays out for symbols which line up Left to Right or Right to Left! This makes up for the lack of scatter symbols and brings with it consistent rewards while playing as it opens up possible winning combinations.

The real jewel of this game lies with the donkey. As the Wild, the donkey is what you will be keeping a lookout for, as what better way to have a donkey than feral?! A wild donkey jumping onto reels 2, 3, and 4 will count for all symbols, and a donkey showing wild face will expand to cover all positions on the reel, paying out lucrative awards. Not many things in slots are better than expanding wilds, and the donkey here is a wildly expanding wild, which triggers an instant re-spin when it bounces onto screen to show you a good time with some extra spins. And then any wild donkey who shows up to the party after a re-spin will then again trigger another free instant spin!

While we know of them as being paper mache, the original piñatas were pots made of clay. Can you imagine beating a clay pot until it breaks open? How exhausting. Luckily for you, you do not need to strain too hard for your rewards any longer. Without any bonuses, life sure was considerably tougher in the 16th century, huh? No wonder they were pillaging everywhere they went and making blood sacrifices. But now we live with a bit more luxury, and with the spring about to break, it is time for us to let all of that winter repression loose and get into a party mood! And what better way than by destroying some paper mache donkeys! We mean online, ( and mobile! ) of course. The sun is for bathing, not straining while wildly flailing a bat! 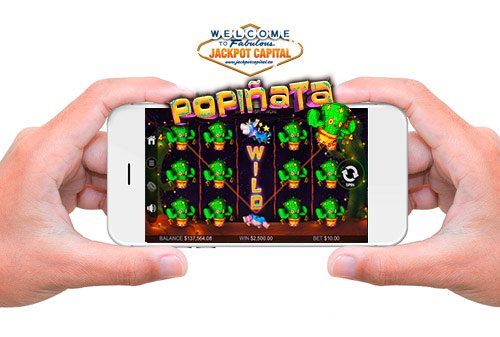 Take a Swing at a Pre-Release Bonus!

We know that you don’t need any more motivation to play our exciting new game, Popiñata, but we just can’t help ourselves! We have a lot of excitement for Popiñata, and enough confidence in it to give you an awesome pre-release bonus offer! But this is only the pre-release special to warm yourself up with, and after Popiñata launches on April 19 there will be plenty more bonuses to keep the fun going. Who needs jackpots when not only do you have a game that has such frequent, high payouts, but great bonus offers from us!

This special teaser bonus can be played on any of your favorite games here at Jackpot Capital, and if you’re already craving fun time, there’s plenty of options available to you! Our most recent game, Secret Symbol, is a complete adventure, so if you want to get your blood flowing, this is certainly the game to warm up with! Or, how about another of our most recent games, Funcanglong, an awesome adrenaline rush of a game to get you in the party mood before attending the fiesta later this April with Popiñata!

A minimum deposit of only $45 is needed for you to possibly max out on up to $300 in bonus cash. This will surely give you plenty of practice for the big day - April 19th! Be sure to come back and join us for more new game bonuses, and don’t forget to have fun as you get into the party mood!